Last night a commenter on my CAIR post asked the following question:

My son’s school is going to take him to a mosque as a field trip. How do I determine if this mosque is on our side or the jihadis’?

I told him that it would be a very unusual mosque that is “on our side”; the best we can realistically hope for from a mosque would be a kind of neutrality.

Then I put the question to the 910 Group, and this morning I got an email from one of their experts on Islam and CAIR: 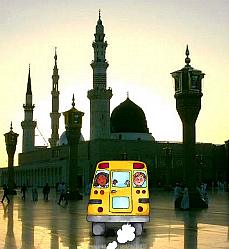 I remember seeing a list, but can’t remember where. I’ll keep looking, but it’s probably out of date anyway — they pop up in new places all the time. [Later followup: Found that list of mosques in this classic report (pdf format) on Saudi influence in mosques, but it’s only 15 mosques listed at the end, and the report is 2005. However, the document is useful for your local parent as background, and to distribute to the school and local churches/synagogues/temples if needed — from FreedomHouse.org.]

REQUEST: If he can give me a name and a city/state or zip code, I may be able to give him info — my assumption on most mosques is that 80%+ have been taken over by Salafist imams. Here’s a quick Mosque locator, that may pick up a website if it doesn’t come up in Google once we have a name for the Mosque.

LEGAL BACKGROUND: Here’s an NEA article, one that takes a sort of limited comparative religion approach but would allow preferencing Islam.

Here’s the most commonly cited document on how to handle religion in schools, from freedomforum (liberal, does not require balance — again, can allow a rationale for preferencing Islam over other religions).

TACTICAL RECOMMENDATION: Let’s assume the mosque they’re going to is pure Wahhabist. I say, bring it on — we need incidents to define issues in bold colors, not pastels: I’d have him ask 3 questions:

ASSESSMENT: My own view — the more comparative religion the better, but if there are not at least a couple of Christian and one Jewish trips/curricula/historical perspectives etc. provided (and Hindu/Buddhist as well if that group is represented in the local population), then it’s not comparative religion, it’s proselytizing.

And if the local churches and synagogues don’t have any outreach to the schools to compete with the local mosque, this is an opportunity for him to contact them and help them get their act together. It seems to me it’s another category where outreach can be helpful — to synagogues and churches to let them know what the competition is doing, and that they have a legal right to get in there and compete. Not to mention a moral obligation to do so.

Readers are welcome to suggest other ways for concerned parents to be proactive about the creeping Islamicization of their children’s schools.

Update: Here is an additional resource sent in by the 910 Group — Parents and Students for Academic Freedom. From their mission statement:

The Students for Academic Freedom Information Center is a clearing house and communications center for a national coalition of student organizations whose goal is to end the political abuse of the university and to restore integrity to the academic mission as a disinterested pursuit of knowledge.

They cover K-12 in addition to the university level.

9 thoughts on “A Field Trip to a Mosque”