Hey, we are winning!

If you want to observe a positive development, you should turn your eyes on the present situation in Denmark.

There has been a lot of fuss about the Dansk Folkeparti youth organisation.(a patriotic local party)

You probably know the some of the story. But here are the latest developments:

Conclusion: Well all this uproar and talking is just — talking. And it doesn’t work — if you just continue using your freedom of speech, telling the truth, in the end the muslims street will give up, because it does not work. In the process the muslims also lose a lot of good will and credibility, because they act totally stupid.

So after all, the weapon Freedom of Speech is as potent as ever, if we dare use it

And an email from regular commenter and translator Kepiblanc:

The Danish ministry of foreign affairs is on high alert. The recent publishing of a movie from a private party where some members of a Danish political youth organization amused themselves by depicting a certain prophet as a drunken camel has triggered the usual reactions around the Middle East, especially in Iran whose PM, Mr. Ahmadinnerjacket (or some such) has called for yet another ban and trade boycott on Denmark (wasn’t the first one effective?). 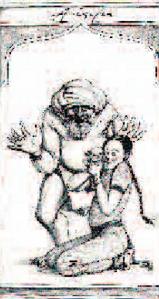 The Danish PM, Mr. Rasmussen, and various political leaders have tried to downplay the incident, calling it “some childish provocation by drunken teenagers”. Without any effect, of course — the Danish Tehran embassy was immediately put ablaze by Molotov cocktails.

Poor Mr. Rasmussen: This morning Denmark’s third largest political party — The Danish People’s Party (part of his parliamentary base) — published its monthly magazine Dansk Folkeblad. On page 26 one can find a review of a book by German author, Dr. Armin Geus, who describes the prophet Mohammad as a sexually depraved man with a pedophile character. Worse yet, the article is illustrated with a not-so-flattering drawing.

Needless to say, the local imams are up in arms and “phoning home”. If you intend to go to the mosque tomorrow, better turn down the volume on your hearing aid…

Kepiblanc has thoughtfully provided us with a copy of the illustration from Dansk Folkeblad. Investment advice: Buy stock in butane lighter companies right now; also manufacturers of Danish flags.

We have a number of very pessimistic readers who comment here. Heck, I’ve been known to be pessimistic myself, when the times warrant it.

But I like to celebrate good news when it appears. So, before all the doom-and-gloom crowd gets here to micturate on my Muesli:

Let’s hear it for the Danes!

20 thoughts on “The Good News From Denmark”