I’m reading the Council nominations today. Usually, I read the Council on Wednesday and then the non-Council offerings the next day. This week I turned it around, just for variety. 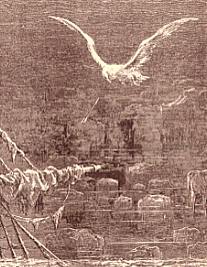 And now I’m disgusted. Every new example of the MSM propaganda posing as news seems to become more and more egregious. This week, Done With Mirrors has titled his post “The Media We Deserve.”

Callimachus always presents coherent and tightly ordered arguments. But this one…well, let me present the quote from a link on his post — he doesn’t actually quote it since he is moving on in building his argument—but I clicked the link out of curiosity. This is from the News Sedition Section of Yahoo, under the subsection US News, and a further drill down to “Bush Administration.” Bear in mind that this is not an editorial, it’s supposed to be a news report. However, it is anything but repotting. It’s sabotage disguised as reportage:

SCOTTSDALE, Ariz. — President Bush tried to drown out political anxieties about war and sex Wednesday by sounding alarm bells on national security and urging people to “vote Republican for the safety” of the country.

This week has put the Republicans’ bid to keep control of Congress in further jeopardy and brought even more bad news for the president. Republicans on Capitol Hill have been damaged by one member’s online sexual advances against teenage boys, while military commanders in Iraq are grappling with a rash of troop casualties and allegations of police corruption.

New polls show Americans are increasingly unhappy with Bush’s leadership and the war in Iraq. And even after months of campaigning on immigration reform, he had to sign a bill Wednesday with only a fraction of the changes he wanted.

Still, Bush persisted with the strategy that has brought Republican victory in the last two elections — campaigning on national security with some tax talk thrown in. With Republicans down, he tried to bring Democrats down even farther.

The “news report” goes on for many more paragraphs, including descriptions of the scenery. The troops to whom he was speaking are excised from this picture; they are never even mentioned. More faux reportage from faux journalists.

I loathe the MSM. Callimachus says it’s the “media we deserve.” I don’t agree. It’s the media we are stuck with, a media we inherited and cannot get rid of because it so heavily controlled by the elites in this country: the academic community, the “journalist” community, the celebrity bubble, and the Democrats’ party have more dirty tricks up their sleeve than Nixon and his plumbers ever dreamed of doing. It’s not about brains, it’s about who controls the gate on the flow of information. Gaining control of that gate is going to be a long, uphill slog.

This entry of Callimachus may well win the Council vote. If it does, you’ll see it on Gates somewhere down the line in the Council winners’ post . Meanwhile, go read it now, just to see where he’s going with this:

Now, what was entirely missing from this story — astonishing, since it was another headline on the same day — was the newly released barrage of “enemy propaganda” by Ayman al-Zawahri of al-Qaida. And sure enough, it sounds exactly like Bush’s domestic critics…

The “barrage of ‘enemy propaganda’“ starts right here in this country. Who needs al-Qaida to bash us when our perfect storm of seditious elites is willing to level our country in the name of their own treasonous ideals? How does one even begin to break through the shell of such blind narcissism?

5 thoughts on “The Albatross Media”