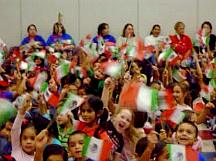 Remember the Texas elementary school where the pledge of allegiance to the Mexican flag was recited on Mexico’s Indepedence Day? Well, a radio station in Houston has posted videotape of the event in question.

The principal of Velasco Elemntary arranged the September 16th celebration, and later came under a lot of criticism from parents of children at the school. When news of the incident escaped into the media, he had to apologize, though he asserted that he had done nothing wrong.

By filing a request under the Freedom of Information Act, KTRH News Radio obtained the the tape from the school district.
– – – – – – – – – –

As reported by KTRH,

Whether students also recited the Mexican pledge remains a point of contention.

The second video shows the leaders saying the pledge to the Mexican flag, but not the students. Watch it and see what you think; I hear the leaders reading the pledge, but there is a murmur of voices in the background reciting along with the leaders.

Who could that be, if it’s not the children themselves?

10 thoughts on “Pledging the Mexican Flag in Texas”