UPDATE: Surprise, surprise…there are good South American blogs out there. Here are some starting places which will permit me to drill down further.

Comprehensive, with links to other Venezuelan blogs, divided by language. He also has a great map of the country permanently on the sidebar.

OnPublius Pundit, scroll down the side bar till you hit “The Americas.” Just glancing at it, I see Colombia, Argentina, Bolivia…this will take awhile to work through.

Thanks to commenters Matt andDon Miguel for the URLS.

In a previous post, I asked if anyone had references for South American blogs written in English. A commenter sent two for our consideration.

The first is “The Devil’s Excrement” — the explanation for the title being this:

Señor Alfonzo sure got that one right. Look at the snake-bitten Middle East.

This blog is a good introduction for people like me who don’t know much about the particulars of Venezuela. Top posts discuss the details of the coming elections and the efforts made to keep them honest. There are a few of these “details” I wish we had in, say, St. Louis, Chicago, New Orleans, and anywhere in Ohio or Washington (the state, or the District of Columbia, take your pick).

Here’s how they set up the voting tally procedure:

—All machines have to be disconnected all day. They can only be connected to the network, after every single tally sheet at the particular voting center has been printed and copies distributed to all sides. Once all of the President’s of each mesa meet and agree all the tally sheets have been printed and distributed, can the machines be connected to the network.

—Once the transmission is completed, the audit will begin. All of the President’s of “mesas” and in the presence of anyone from the public, will write down numbers in pieces of paper which will be put in a cup and someone from the public, not the Presidents will choose a piece of paper, another person another one, until all “mesas” to be audited are selected.

A copy of the audit tally will also be provided to each side.

Also, scroll down to see a moving video of Venezuela with the song “Por Amor” playing in the background. Evidently, Chavez deludes himself that what he has done has been for the good of Venezuela. So he asks for the citizens’ vote his ticket “for love.”

Beneath the poverty and military violence, you can see a people of courage. Some of the images of military excess, and of hungry young children, of the polluted beaches and rotting infrastructure, are disturbing. Still, it is more than worth your time. You might even try playing it on Thanksgiving; if you simply can’t think of anything in your own life that moves you to gratitude, this video will do it.

In another post, this image is up, with the translation below it. 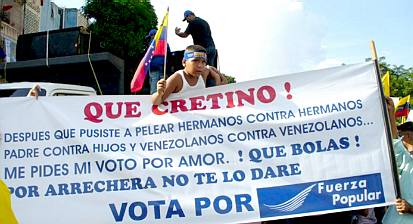 “What a cretin!
After you made us fight brother against brother, father against children and Venezuelans against Venezuelans, you ask for my vote for love.
What balls!
Because I am pissed I will not give it to you.
Vote Popular Force”

Now there is a political poster with ummm…a certain manliness about it. Gives you hope that Gagdad Bob’s observation about “Men Without Chests and Women Without Breasts” is a condition confined to the northern hemisphere and Eurabia.

At any rate, can you imagine such a poster here in the good ol’ U.S. of A.? From either side of the spectrum? It would give a certain liveliness and unpredictability to our tediously offensive but banal calls for impeachment and such. An uproar beats a screech anytime. I have a few banners in mind for the opposition that will naturally arise to the idea of Hillary as our commandress-in-chief. However, I would omit the mention of body parts. That is an indulgence best left to the men remaining among us, the ones, unlike Larry Summers, who still have all their equipment (hmmm… there’s an observation that should rankle the wrinkles of NOW). Poor Ms. Summers.

Anyway, we now have a good South American blog, thanks to commenter Ben, from the thread on the post about a new blog from Finland. Ben lives in America (Michigan). From his blog(s) he appears to be, perhaps, a Brazilian native. However, one of his efforts is called “ATA English Edition”. He doesn’t post there often enough, but the top post —from July — remains timely. Read “The Ninth Child” — not only because of the jolting anecdote he uses to open the post, but more importantly for the way he applies the moral of the that chilling story to make his points about Israel, Lebanon and the US. His remarks have not stale-dated at all. 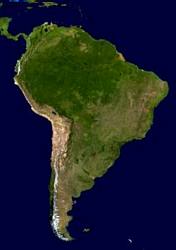 I look forward to seeing more South American bloggers. Anyone from Argentina who writes for the Anglosphere? Peru? Ecuador? Chile? Brazil? Somebody down there…

…now that the US has begun to make amends for our neglect of India, it’s time — it’s past time — for (northern) Americans to start paying attention to our neighbors from the South. So please send any candidates this way, please. I’d like to see our amigos to begin to light up the dark continent on our website. Even more, I’d like to write about them and put them on our blogroll. “Yanqui Go Home” blogs don’t count; we can read that stuff in the lemming press here.

5 thoughts on “Blogs From and About South America”