The tree of liberty must be refreshed from time to time with the blood of patriots and tyrants.

Thomas Jefferson must be rolling over in his grave. Last Thursday the Mohammed Khatami Traveling Dog and Pony Show came to the University of Virginia. Today, even as I write, the retired tyrant is visiting Jefferson’s home, Monticello. The management there has very kindly closed the establishment for the whole morning so that Mr. Khatami can have the place all to himself (well, all to himself, his retinue, the press, his bodyguards, and the State Department dogsbodies who accompany him wherever he goes).

The tree of liberty planted on the lawn at Monticello must be thirsty indeed.

Charlottesville is just a ways up the road from us, but Mr. Khatami’s speech at UVA was by invitation only, and under tight security, so I could not report on it in person. I picked up the news of his activities from our local paper, The Daily Progress. Fortunately, they have an online edition, so I can present excerpts from the article without having to transcribe it.

Mr. Khatami surprised his audience by not opposing the American presence in Iraq: 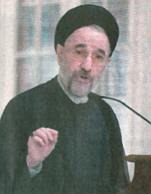 “If you ask if tomorrow America should leave Iraq, I would say no, don’t do it,” Khatami said in response to a question.

Rather, Khatami — who clearly indicated his displeasure with the way the Iraq war has been conducted — said he wanted to see the United States work with other governments to solve the problem. An unstable Iraq would not benefit his country, he said.

“On the one hand, I believe the occupation must end,” said Khatami, Iran’s president from 1997 to 2005. “At the same time, we can’t leave the present Iraqi government in the hands of insurgents and terrorists.”

Now, mind you, Mr. Khatami was speaking in Farsi, and his words were being translated into English. Here’s an alternative translation: We need the great Satan to stay in Iraq until all those Sunni scum have been slaughtered, so that our boy al-Sadr can have the run of the place when the American dunderheads depart.

“Perpetrators of acts of violence would even attempt to alter the message of love and peace asserted by the religions and cultures of the world in order to justify their devastating goals,” he said. “They consider resorting to violence and terror a godly undertaking.”

Do you think he was describing the Iranian regime?

But when later questioned about Iran’s support for Hezbollah in Lebanon, Khatami would not condemn the militia’s violent acts against civilians, and in fact praised the group for “protecting the country” against Israel and other outside armies.

“Hezbollah has great support within Lebanese society,” Khatami said, disputing that Iran — which is widely seen as the group’s patron in the region — was directing its efforts.

Uh-huh. Now pull the other one.

There were a lot of fellows like this around the Grounds at UVA.

Khatami’s UVa appearance was marked by little advance publicity and heavy security, including a black-clad sniper and lookout posted atop the Rotunda’s dome. Many students who watched Khatami’s caravan of six black Suburbans and state police escorts had no idea who was visiting.

The U.S. Department of State wasn’t taking any chances Thursday when it came to Khatami’s visit. Security personnel surrounded the Rotunda beginning before 10:30 a.m., and those entering were subject to multiple identity checks, followed by searches of all bags by security agents as well as explosives-sniffing dogs.

Massachusetts governor Mitt Romney has had the guts to deny Khatami any Massachusetts-based security for his trip to Harvard. Virginia governor Tim Kaine doesn’t have the requisite manly equipment (and is also in the wrong party) to act likewise; Charlottesville police and the state cops were abundant at UVA on Thursday.

But even without state and local protection, Mr. Khatami has plenty of State Department goons to augment his own bodyguards.

It’s a disgrace that our government let this man into the country. He and his successors are up to their clavicles in the blood of innocent people in Israel, Lebanon, and Iraq.

We are in an information war, and we just handed our enemy a major tactical victory. Whenever this tyrant shows up on Iranian TV and Al Jazeerah with a huge escort of American law enforcement in riot gear; whenever our TV anchors report breathlessly on his words as if he were Mahatma Gandhi or Matt Damon; whenever he walks the sovereign soil of the United States of America without being clapped in irons and moved to new accommodations in Gitmo — then our enemy knows we are not to be taken seriously, and that we don’t know who it is that we are fighting.

Mr. Khatami’s visit, however, did not go entirely unprotested:

A small group of students affiliated with conservative groups handed out anti-Khatami leaflets outside the speech. One read: “Khatami can speak freely in the Rotunda … but Iranian students weren’t that lucky when he was president.”

Remember, this is being reported by The Daily Progress (known locally as “The Regress”), a lightweight paper that reports some local news, recycles wire stories, and generally acts as the local hick version of The New York Times.

I don’t know how big the demonstration really was, but we have first-hand evidence that conservative students weren’t the only folks there demonstrating. Yesterday Dymphna ran into an Iranian acquaintance of ours, an expatriate businessman (and American citizen) named Hasan. Hasan is no student, and he’s not particularly conservative — I have heard him rant bitterly against George W. Bush

But Hasan told Dymphna that he had been at the demonstration along with other Iranian-Americans, and was one of the people shouting slogans against Khatami.

“I hate that guy,” he said. “Those people, the mullahs, have ruined the country. They’re like ignorant people from the sticks; they’re from the little villages in the country and they don’t know nothing about anything.”

Hasan went back to Iran recently for a visit, and was appalled by the conditions in his country. He said it was not the kind of place he wanted to take his children to see.

Dymphna asked him what conclusions he had drawn from his visit home.

“It makes me realize the value of freedom,” he said.

Update: Commenter Consul-at-Arms has taken me to task, and rightfully so, for casting aspersions on the State Department employees assigned to Mr. Khatami’s security detail.

My response was as follows:

My frustration and disgust over the policy and politics of the people in the top layers at State led me to defame those people at the lower levels who are just doing their job.

I retract the slur, and pass it on to Armitage and maybe even to Dr. Rice herself, if she approved this farrago.

21 thoughts on “Tom Jefferson and the Tyrant”