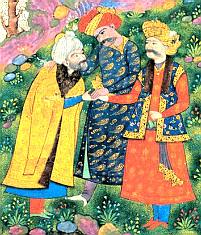 Last Saturday Northeast Intelligence Network posted an interview with Al Qaeda leader Abu Dawood. According to the report, Abu Dawood summoned Pakistani journalist Hamid Mir by cell phone, and the two met on the outskirts of Kabul, at the tomb of Sultan Mehmoud Ghaznawi, on September 12th.

Abu Dawood said that America has received its last warning from Al Qaeda. The mujahideen are poised to launch a major new attack, this time with chemical, biological, or nuclear weapons smuggled across the border from Mexico.
– – – – – – – – – –
I have no idea if this interview is genuine; I can find only the original Northeast Intelligence Network report and its derivatives on the web, and have no independent confirmation of it.

The whole thing could be completely bogus. It could well be disinformation; a taqiyya operation designed to tie up American intelligence assets in a snipe hunt.

But if there’s any accuracy to it, we can expect something big to happen in the next few days or weeks.

Some excerpts from the interview:

…a bigger attack than September 11th 2001. Brother Adnan [el Shukrijumah] will lead that attack, Inshallah… He is an American and a friend of Muhammad Atta, who led 9/11 attacks five years ago. We call him “Jaffer al Tayyar” [“Jafer the Pilot”]; he is very brave and intelligent. Bush is aware that brother Adnan has smuggled deadly materials inside America from the Mexican border. Bush is silent about him, because he doesn’t want to panic his people.

The American Muslims are like a human shield for our enemy; they must leave New York and Washington… We have a different plan for the next attack. You will see. Americans will hardly find out any Muslim names, after the next attack. Most of our brothers are living in Western countries, with Jewish and Christian names, with passports of Western countries. This time, someone with the name of Muhammad Atta will not attack inside America, it would be some David, Richard or Peter.

…I am saying that Muslims must leave America, but we can attack America anytime. Our cycle of warnings has been completed, now we have fresh edicts from some prominent Muslim scholars to destroy our enemy, this is our defending of Jihad; the enemy has entered in our homes and we have the right to enter in their homes, they are killing us, we will kill them.

13 thoughts on “The Cycle of Warnings Has Ended”