We have a regular commenter, “Zerosumgame”, who has argued repeatedly about how pervasive anti-Semitism is in Europe. He has been so persistent on this topic that I and others have referred more than once to his “monomania”.

Our Danish commenters, however, have been arguing vigorously that Denmark is different. The irrepressibly optimistic Phanarath, in particular, has been adamant about Denmark’s tolerance towards and defense of the Jews.

But last night, in a comment on an unrelated thread, he directed a sobering reassessment of the situation to Zerosumgame:
– – – – – – – – – – 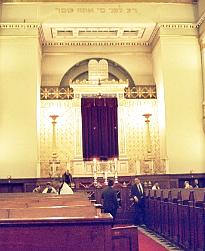 It is getting harder to be a Jew also in Denmark now. Well, it seems to have been for awhile, but I didn’t realise before.

I read about it here almost a week ago. It talks about how much Jews have, for centuries, been appreciated in Denmark for their contributions in all fields of society. But now they cannot walk safely in the streets. It seems time has been turned back to WW2. “Det Mosaiske Troessamfund” Jewish faith community has had to hire an unknown number of security people for the purpose of keeping Jews in Denmark safe.

It also says that we are a new generation of Danish men ready to defend the Jews as we have before.

I am angry and shamed by this. I thought you should hear it from me, since I was so persistent in denying that this was taking place here. If we are unable to defend our Jewish citizens, then we deserve all the things you have been saying about us.

The story originated in B.T., but all of the information is in Danish.

Zerosumgame’s advice to Phanarath? Get out of Europe while the getting is good. Bring yourself and your family to the Anglosphere, where your talents and energy will be welcomed.

He quotes Nelson Ascher: “Anti-Semitism is the tool that the Islamofascists have given Europe to allow it to commit suicide”

37 thoughts on “Jew-Hatred Comes to Denmark”