Longtime reader, commenter, and translator LN left a comment on Wednesday’s post that deserves a separate post all its own. LN is a Swede who has been around for a while and has definite opinions about current events in his country.

I have adjusted his spelling and syntax, and revised some of his expressions to conform with current idioms, but otherwise I have left his writing intact:

The Swedish People Have Ceased to Exist — by Decree of Their Own Government. 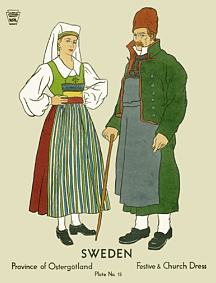 No more SWEDES, according to the “Finale Report of the Department of Culture” (Ds 2000:43)!

Instead we are now “persons with a Swedish background” (person/er med svensk bakgrund).

In our neighbouring countries there live Danes, Finns, Norwegians, and Germans, but in Sweden there live “persons with a Swedish background” and — not to be forgotten — a damn big heap of immigrants.

The reason for this ridiculous change of terminology is the extensive immigration and the pursued unsuccessful policy of integration. The relatively small and society-disintegrating leftist ELITE of the country wants the MULTICULTURE to dominate the land and the lives of its People — without ever having asked the People. According to the Government Secretariat (Regeringskansliet) Sweden shall bear the stamp only of its immigrants and their cultures, and their values and behaviours and religions.

The more immigrants the more multiculture! To integrate a growing volume of immigrants from 150 countries into a stagnating labor market is not possible. They are too many. For 14 years the net balance of new jobs in Sweden is almost naught, zero, zilch. Big groups of immigrants have an employment rate that runs 30-40 per cent lower than that of the native population (the Swedish Government Official Report 2004:21 and SCB/RAMS 2002). Fewer people are employed today than in 1990. And it is difficult to get a job in Sweden without having reasonable knowledge of Swedish!

For demographic or other reasons approximately a million persons of foreign background do not contribute to GNP. This million was not there in 1970. The costs for the immigration in 1999 amounted to calculated SEK 240,000,000,000 — that is $3,650 per capita. Of course, this figure is denied by the government — but they do not produce ANY figures of their own. They are as uncommunicative as the Stasi in the old DDR. The costs might be somewhat higher today, depending on the increase of immigrants, with approximately 100,000 persons net added since 1999.

The political multiculture has led to poorer welfare for the native-born population and to better welfare for the immigrants. The immigrants are offered the same or even better social benefits than the ethnic Swedes. Many get dental care free of charge (it must be GOLD bridges!) within the social welfare system, and at the age of 65 it is possible to get elder-support (äldreförsörjningsstöd), which is a form of pension, of currently up to SEK 10,500 ($1,440) per month — tax free — without ever having had to work and pay taxes in Sweden.

How does this work? Suppose now that Bassam Al-Salhi from Gaza is dogged by bad luck, so he travels to Sweden where he becomes a refugee needing asylum — he succeeds in convincing the Swedish Immigration Board that he is death-threatened back home, so he receives his ‘residence permit’. Now paradise has opened — wine, women and song!

In less than 5 years the whole clan Al-Salhi is here — wife, 5 children, father, mother and grandmother! I think it is called a ‘family-reunion’. No one in Al-Salhi’s family is working. The state is paying something around SEK 45,000 ($6,200) a month to the poor Al-Salhi-family.

Approximately 70% of Sweden’s healthcare capacity is used by immigrants (2003) — however, to a decidedly smaller extent in June, July and August, because then one is home on vacation in those countries one has fled from. Were there not 5,600 “Swedes” that recently were transported home from Lebanon through the agency of the Swedish Ministry of Foreign Affairs?

According to the terminology and the calculations — before manipulation — of the Government Secretariat (Regeringskansliet), the immigrant population amounted to just over 2 million, or 22 percent of the entire population — and the native-born (the Swedish) population to just over 7 million in 2004. However, there are, as we know, no longer any Swedes, only “persons with Swedish background”.

A group of persons with entirely or partially foreign background has thus been permitted to exert an influence over how the majority of Swedes will be described.

Only multicultural fanatics/lunatics can invent such a ridicule-arousing concept as “persons with Swedish background”. The Central Bureau of Statistics (SCB) has in collaboration with the Swedish Migration Board (Meddelande i samordningsfrågor 2002:3) made native-born persons with one native- and one foreign-born parent into Swedes by establishing this concept of “person with Swedish background”. This partial group constitutes about 7 per cent of the entire population. The consequence of the fact that one native-born, with one native- and one foreign-born parent, statistically are considered being “Swedish”, is that the sum of “persons with foreign background” is reduced to just over 1.4 millions and to 16 percent of the population, instead of 2 million and 22 percent respectively. This is just an example of how the Government is lying with statistics.

Probably this is the result the Government wanted to achieve. The number of immigrants has been reduced, at least statistically. This can be used as an argument for continued mass immigration and to defraud the Swedes — sorry, we mean the “people with a Swedish background”; for example, it is impossible to determine if an ethnic Swede or an immigrant has committed a certain crime.

Concurrently there is an increase of “persons with Swedish background” to approximately 7.6 million, from just over 7 million genuine Swedes. In this way the Government does not need to explain why the native population diminishes, why not only well-educated people of vision — almost en masse — are leaving the country.

According to SCB’s forecasts the immigrant population will increase to approximately 50 percent by about 2015-20. The majority will be Muslims — God will be replaced with Allah — Sweden will be part of the Caliphate. As the Swedish Minister of Migration Jens Orback lately said in an interview: “We must be nice to the Muslims now — hopefully they will remember it when they are in majority, and be nice in return”!

The Media have started abolishing the concept ‘Swede’, too. Both in Swedish Public Radio (SR, Sveriges Radio) and in Swedish Public Television (SVT) this has been observed during 2005 and 2006. The Social Insurance Office’s (Försäkringskassan) Annual Report of 2005 talks about “persons with Swedish background” instead of Swedes. It is clear that Sweden’s history and culture will be sacrificed on the altars of multiculture. About this there is still deep silence from those who decide.

Anybody wanting to recapture the old and traditional epithet “Swede-s” (svensk) should by all means avoid giving their vote to the ruling treasonable junta on election day, the 17th of September 2006.

There is an inscription from late medieval time, I guess, made by an old monk who truly was a wise man, in the Riddarholms-church in Stockholm. listing the six causes for Sweden’s misfortunes: 1. Selfishness, 2. Wily Hatred, 3. Contempt for the Laws, 4. Indifference for the General Well-being, 5. Short-sighted Admiration for Strangers and what is Foreign, 6. Stubborn Envy of Countrymen.

PS Does anyone recollect the German expression: Die Dummen Schweden? 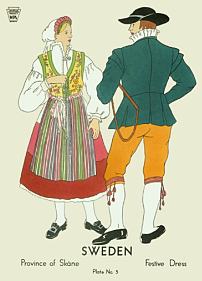 While searching for appropriate images for this post, I ran across an excellent resource, the online document collection of the Bienes Center, located in the Broward County (Florida) Main Library. The two samples I have chosen are from a group of drawings commissioned for educational purposes during the 1930s by the WPA.

The good folk of the Broward County Library must have been reading LN’s mind, because here’s what their disclaimer says:

The written material and images from the Bienes Center’s WPA Museum Extension Project Collection are presented here as cultural artifacts from an important chapter of this nation’s history. These items were used as visual educational aids in several states’ public schools, libraries and children’s museums and were created during the years 1935-1943. As such, they represent many of the dominant social, cultural, and political values of their era.

While the research techniques employed to write the texts and create the objects were in accordance with the most rigorous academic standards of their day, the information conveyed by the original WPA material presented on these pages cannot be taken at face value for its scholarly content today. Significant portions of the written material intended for teachers to use in the classroom would now be considered outdated, or worse. By today’s standards, some of its content would undoubtedly be considered demeaning to women and to certain ethnic, national, racial, and religious groups.

Could anything illustrate more clearly the problem we are facing today? Die pathetischen Dummen Schweden must be grievously offended and demeaned by these images!

LN, you must contact Broward County and express your outrage. Surely you feel disrespected and excluded!

The methods used were in accordance with the most rigorous academic standards of their day. Oh, how the present condescends to the past! How much better we are nowadays! How enlightened and mature we are in our understanding of the “other”!

Here’s a disclaimer from the 2093 MetaNet edition of certain McGraw-Hill textbooks from 1998-2007:

While the research techniques employed to write these texts were in accordance with the most rigorous academic standards of their day, the information conveyed by the original textbook material presented here cannot be taken at face value for its scholarly content. A significant portion of the material was censored, altered, “photoshopped”, redacted, and selectively edited to produce a result that was in accordance with the “politically correct” ideology of its time. No factual accuracy can thus be inferred for the material contained herein.