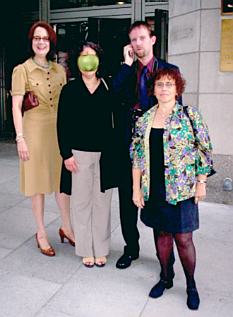 As many of our readers know, I was at the Pajamas Media event last night at the National Press Club. I had a great time, and took a lot of photos. Tomorrow I will do some name-dropping about who I talked to, and will post more photos.

But for tonight, we have (from left to right), Fausta of Fausta’s Blog, Neo-neocon, Michael Totten, and Judith of Kesher Talk. Click the photo to see a somewhat larger image.

I met up with these fine folks before the event, and while we were waiting for the conference room in the NPC to open up, we refreshed ourselves with adult beverages in the bar of the JW Marriott. This photo was taken in front of the National Press Club, just before we went in.
– – – – – – – – – –
Neo-neocon has a magical apple that follows her everywhere and always hovers right in front of her face whenever a camera starts taking pictures. Very strange!

I wore a “Baron Bodissey” button of my own device (featuring the photo of my illustrious look-alike, Prince Otto Von Bismarck), because PJM provided me with a name tag showing only my real name. People who looked at my name tag looked puzzled and said, “Who…?” But people who looked at the Baron said, “Ah! Gates of Vienna!”

I sat in the front row at the event itself, and took a lot of photos of the panel in action. I’ll see what I can post of them tomorrow.

I hear Pamela already has some photos and video up. She is possibly the most energetic and outgoing person I have ever met, a whirlwind in human form. More power to Atlas Shrugs!

4 thoughts on “An Evening in Our Pajamas”