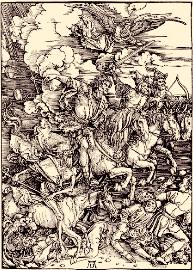 Last week I wrote about Islam, especially radical Islam, as a virus within the complex information system that we call Western civilization. There is something about the simplified and dumbed-down Wahhabi version of Islam that is adept at exploiting the weak points in Western culture. Within the prisons and in the underclass, among the intelligentsia of the academy and the apparatchiks of the media: in these places Islamism finds the West’s weak spots and germinates its spores. Where it does not convert, it co-opts, and any immunological defenses against the growth of the organism are thus neutralized.

Such is this pathogenic infection. But what is the pathogen’s host?

In biological systems it can be an individual cell (viruses), an organ (cancer), or the entire organism (bacterial infections). In electronic information systems it can be a single computer or an entire network. In a culture it can be a country, a language group, or an entire civilization. However, all cultural viruses establish themselves via the individual, within what I have called a person’s cultural template, the acquired system which includes all information that is not instinctual — language, mores, customs, religion, etc. A successful pathogenic invader finds the weak point in the template, neutralizes its defenses, and then takes over.

Any ideas that spread successfully within a culture can be viewed through this analogy. They do not have to be pathological; for example, Christianity and the scientific method, just to name two, were systems of ideas which replicated themselves throughout Europe and its colonies, helping to create the modern civilization whose benefits we enjoy.

But a successful meme can just as easily be destructive, and cause damage to the culture and death to millions of people before it kills its host or is stopped by newly-evolved cultural antibodies. Success isn’t determined by the “goodness” of an idea, only by the efficacy of its replication.

And this new Islamic plague has proven to be very successful indeed, not just at replication but at exporting its Third World pathology to locations thousands of miles from its home base. Where did it come from? It didn’t arise ab initio; it must have mutated from previous forms.

Historical Islam, as transmitted by the genotype in the Koran, is an obvious source. But why this sudden new virulence in the last three-quarters of a century?

As I made clear in my post about Hizb ut-Tahrir, modern versions of Islam are recombinant organisms, composites of traditional Islam mixed with the Socialist virus that so plagued the 20th century. These two viruses have exchanged strands of DNA, and the virulence of Islam contains an enhanced and mutated copy of virulent Socialism.

The fierce Salafist and Wahhabi variants of Islam can be followed back through their genetic history. Sayyid Qutb and Muhammad bin Abdul-Wahhab are relatively recent examples of the violence and intolerance of Islam; yet it seems that the closer a Muslim adheres to the text of the Koran, the more Salafist his behavior becomes. As a template for pathogenic replication, the Koran is a fairly stable source.

If you follow the evolution of the Socialist strand backwards into the 19th century, you will find a point of evolutionary divergence, when Marx’s ideas mutated into two different strains. The first was what might be called Democratic Socialism, a weaker form of the pathogen, one which has lately reached its endgame in the European Union of the 21st century. In its own way it is dangerous and destructive, but mild and slow-acting compared with its violent cousin.

Revolutionary Socialism, on the other hand, proved very adept at replicating and spreading throughout the world. It eventually destroyed the substrate which sustained it, but in the meantime the Socialist plague managed to kill and impoverish untold millions of people.

Karl Marx was a major propagator of the Socialist virus, but how did he catch it?

Marx’s Socialism was itself a mutant form of the Romantic notion that uncorrupted human nature, if allowed to return to its original state, would produce Utopia, a heaven on earth. This meme was able to explode when it was hybridized with science, or I should say, “Science”. Marx’s creed was Scientific Socialism, but it was no more scientific than Scientology is.

By the mid-19th century the deity-free creed of Science had begun to replace God as the explanation for the extant cosmos, and the sound that everyone of intellect heard was a melancholy, long, withdrawing roar as the sea of faith retreated down the naked shingles of the world. This process weakened our cultural immune system so that the Socialist virus was able to spread unchecked through the soft tissue of Western civilization.

And the Romantic notion of the perfectibility of human nature, the virus that gave enlightened folk their glimpse down the road to a secular paradise — where did that meme come from?

Moving further back towards Jean-Jacques Rousseau and his Noble Savage, we stumble over the French Revolution.

The bloody uprising that began in 1789, with its severed heads on pikes, mounds of corpses in the street, screaming mobs beating noblewomen to death in back alleys — sound familiar? This was the primary mutation that birthed the deadly Socialist virus. In a way, the 20th century began in 1789, and Islam is only too happy to continue it into the 21st.

The West’s cultural immune system has been severely weakened by the corruption of the academic and media élites and their co-optation by the Islamists. Muslim agitprop flows continuously into the media feeds through which most people gain information about the world, distorting the natural responses that would otherwise emerge in the face of our present danger.

We need to form new antigens.

Fortunately, this is already happening, thanks to the internet and other alternative forms of communication, which allow different “narratives” of modernity. The memes of the blogosphere spread rapidly against the politically correct current because they are more congruent with what the average person experiences as the truth.

What can we do to aid this process?

The typical reader of Gates of Vienna is already inoculated, and possesses the cultural antibodies that will help him fend off the invading virus. The trolls and lefties who wander through here have already been infected or compromised by pathological memes, and they will take nothing from our words here that will change their minds.

But there is a large group of people, perhaps the majority, which has neither been inoculated nor infected as yet; these are the folks within whom the new antigens may develop.

The process will only occur at the margin, in subtle ways that may not be immediately obvious. Screaming slogans and name-calling are not effective; these only strengthen the barriers that keep new ideas from spreading. Persuasion is a long and difficult process as long there is no immediate and deadly danger to speed it along.

Last weekend when we were on vacation we stayed with a good friend of ours, a standard old-style liberal. She’s anti-Bush, a Kerry voter, favors the welfare state and abortion — the usual positions — but she’s not a moonbat.

So, when I talked to her, I was careful to avoid the keywords that would raise the barriers that keep out new information. I mentioned Iran and its nukes, and told her about Jamaat ul-Fuqra and its remote compounds in Virginia and other states. We had an interesting discussion.

She listened carefully and without antagonism, but who knows if it made any difference? All I can do is scatter the seeds — some will fall in the thorns and others on rocky ground, but a few will sprout and grow.

That’s really all we can do, unless we’re among the brave men and women who bear arms to defend our country on the front lines of this war.

The bottom line is that a deadly and destructive virus will inevitably destroy its host, or be destroyed by a host’s newly-evolved defenses.

It’s an open question as to how much death and havoc Islamic virulence will cause before this process runs its course. But the inner logic of the pathogenic system compels such an outcome; we can reassure ourselves with the knowledge that the virus will not be around for long.

This is not the way of Tao.
Whatever is contrary to Tao will not last long.
— from The Tao Te Ching by Lao Tsu, Chapter 55