The advent of digital computers and the emergence of the internet have allowed the development of a generalized theory of viruses as invasive self-replicating structures within information systems. Biological organisms, human cultures, and computer networks all constitute information systems which can be exploited by virus-like entities.

In many ways radical Islam acts as a virus on societal structures. It is passed from host to host rapidly, without the necessity of any intervention by formal political structures. The bug is simply in the air, and is picked up by the susceptible recipient through the vectors of mosque communities and media propaganda. 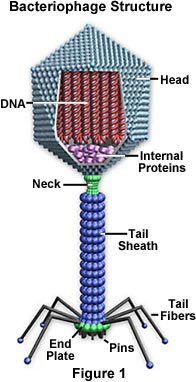 One of the simplest forms of a biological virus is a bacteriophage. It consists of a strand of DNA enclosed in a protein coat, a set of leg-like structures which attach to a host’s cell wall, and a neck or proboscis which enables the virus to breach the cell wall and inject its DNA into the bacterium.

This is possibly the simplest chemical structure to which the adjective “living” might be applied. If one were to digitize the bacteriophage’s entire system – the codons of the DNA sequence, the lattice structure of the protein molecules in the dodecahedral coat, the protein fibers of the legs, and the protein chains in the neck and basal plate – the whole thing might take fewer bits of storage than the web page you’re viewing right now. Yet in short order the bacteriophage uses the bacterium’s own cell machinery to replicate itself over and over within its host until the cell bursts, releasing all the new viruses into the environment to find new hosts and repeat the process.

A computer virus functions in a fashion that is exactly analogous to the modus operandi of the bacteriophage. It emerges from the environment (the internet) and attaches itself to its host (a PC) via a vulnerable receptor site (a hole in the firewall). It replicates itself using the host’s own mechanisms (the script-running software) and then bursts back out into the environment (via emailed copies of itself) to repeat the process.

Any information system is vulnerable to the same kind of malformation: if it provides a mechanism for transmitting and replicating information, it can be infected by the equivalent of viruses. 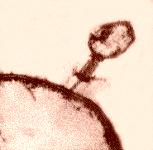 Cultures are information systems that exist within a different substrate from those of biological cells or computer systems. The individual – with a cultural template stored in his brain – is the equivalent to a computer or a cell, and his environment is the complex network of communication by which humans exchange information.

Radical Islam is a very simple information structure, yet quite adept at invading its hosts. It travels through various media and finds a vulnerable receptor in the outer defenses of its host – a cultural template weakened by decades of political correctness and the behavioral sink of the modern popular media – and uses the host’s intellectual mechanisms to reproduce via proselytizing.

A virulent virus may in time destroy itself by being too effective, killing off all the available hosts. But this is of no concern to the viral meme as it spreads and replicates – immediate survival and reproduction are its only motivation.

Any information system – biological or otherwise – that is attacked by viruses develops a defense against such infections. A complex biological organism develops an immunological system – antibodies, white blood cells, and so on – to resist new infections. A savvy computer user installs anti-virus software. Cultures develop their own defenses, collectively-held memes affirmed by restatement in simple forms – slogans, visual images, common rituals, etc.

Among the most effective – and therefore dangerous – viruses are the immunodeficiency viruses such as HIV. They have evolved mechanisms to attack and disable the host organism’s own immunological system at its vulnerable points.

Likewise, a sophisticated computer virus will disable a host’s anti-virus software as one of its first actions after infecting a host. Not long ago Dymphna’s laptop was infected by a nasty internet worm, and the first thing it did was disable the Norton anti-virus software, while allowing it to maintain a façade of its normal functioning. After that the worm could proceed with its dirty work unimpeded.

So what is the radical Islamic version of HIV?

Islam (and not just the radical version) has found the points of PC vulnerability in our cultural immunological system. The antibodies that would otherwise surround and neutralize its memes are converted into “racism” and thus rendered non-functional. The white blood cells of the media, which would otherwise engulf the invader and destroy it, have been thinned out by the leukemia of socialist internationalism and have been co-opted and completely disabled by the invader.

If we are to overcome this infection we must restore our cultural immunological system. We need to establish new lymph nodes in the form of new media, which can then send out healthy white blood cells to engulf the invaders. Deny the enemy the use of “you’re a racist”, and our antibodies can begin to function again.

It’s going to be a long uphill struggle. The pharmacology of cultural anti-retrovirals is still in its infancy.

23 thoughts on “Down with the Flu”