In yesterday’s post I wrote about a vile anti-Semitic cartoon that was published in the Norwegian newspaper Dagbladet and discussed in Vårt Land. At the time I had no translation of the Norse in Vårt Land, but Gates of Vienna is very fortunate that Zonka, who is Danish, can also translate Norse. Here is his version of the Vårt Land piece, with his editorial comments shown in italicized square brackets: 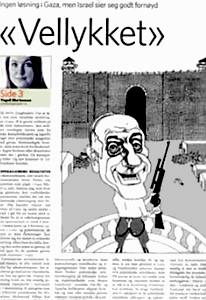 The reactions were severe after Monday’s edition of Dagbladet published a cartoon of Israel’s prime minister as a Nazi commander.

“I have never seen anything like this in Norwegian newspapers. This is a bold assault,” says To Øyvind Westbye, leader of Bergen KrFU [Kristelig Folkepartis Ungdom — Christian People’s Party Youth Organization] to Bergens Tidende.

The cartoon in Dagbladet portraying Israel’s PM Ehud Olmert as a Nazi commander in Auschwitz is taken from the movie Schindler’s List, where the commander walks out to the balcony and shoots a random Jew.

“I have seen such cartoons in extreme Arabic newspapers, but Norwegian newspapers have restrained themselves from bringing such comparisons,” says Westbye.

“Not over the line”

The editor of Norge Idag [Norway Today], Finn Jarle Sæle, tells Bergens Tidende that he sees the cartoon as anti-Semitic.

Cartoonist Finn Graff doesn’t think that he crossed the line:

“It’s a little rude, but this is what I stand for”, says Graff to Bergens Tidende.

I suppose the Holocaust was an “unfortunate faux pas”? World War Two was maybe a “minor dust-up”? The Black Plague was “a slight fever”?

So this is what he stands for. Well, why should we stand for it?

I’m not talking about censorship. I’m talking about vilifying, ostracizing, snubbing, insulting, denigrating, ridiculing, and holding up to public opprobrium people who hold such disgusting views.

Make your opinion known. Boycott the papers in which the works of such people appear. Light a fire under the feet of their editors to make their jobs less secure. Help take away the comfortable sinecures they have enjoyed for so long in the hitherto impregnable redoubt of the Mainstream Media.

If people like this don’t represent us, then their voices should be drowned out by the opposition.

After all, what do we stand for?

Zonka has sent some more material for Gates of Vienna, which we’ll be posting eventually.

Everybody make sure to tell Zonka that he is one righteous Viking dude.

10 thoughts on “What We Stand For”