Carl in Jerusalem is still the best place to get news on what’s happening in Israel. He’s liveblogging the unfolding stories on both fronts, with frequent updates. Just click the link and keep on scrolling.

A brief roundup: The IAF bombed the runways of the Beirut International Airport and put it out of service. The Israelis have blockaded the harbor, isolating Lebanon. The IAF is targeting infrastructure in Lebanon, and is reportedly concentrating on Hizbullah strongholds in south Beirut. Hizbullah has repeatedly fired rockets into northern Israeli towns, causing casualties, including several deaths.

Carl reports a theory about the person who masterminded the latest Hizbullah operation. You’ll have to go over to his site to see who it is. 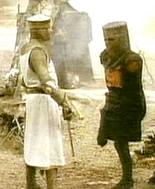 As noted yesterday, the Hamas terrorist Muhammad Deif was badly injured in an Israeli airstrike in Gaza.

According to Carl, he lost some of his limbs (I haven’t been able to find anything on this in the MSM). But Hamas has denied that he was injured.

This all brings to mind the famous scene in Monty Python and the Holy Grail, in which King Arthur strikes off the limbs of the Black Knight one by one:

’Tis but a scratch!