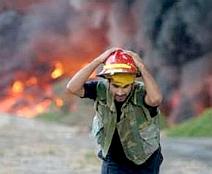 As everyone else has been doing, I am living life less-than-fully present to my environment. At the moment, part of my being hovers over the border between Lebanon and Israel. Not only is the conflict dreadfully painful — I grew up with many Lebanese American friends and in the war against the Jews, I stand with Israel — but this bloody mess has about it the air of something inevitable. The shoe has dropped…perhaps for the final time?

And much as everyone else has been doing, I try to read across a broad spectrum of mass media noise, to see if it is possible to filter out dibs and dabs of reality. I mean the reality underneath, not the who, what, or where of the bombs and brouhaha and the spin of the MSM.

Two commenters on Gates of Vienna — Rich (no profile), and Dave Schuler have summed up the current situation confronting Israel/Lebanon most succinctly.

In fact just about everything Hezbollah and Hamas do is a war crime.

But no one will say it is a war crime, and that Hezbollah and Hamas are war criminals.

Now, Dave Schuler, cutting to the quick of Lebanon’s dilemma:

Sovereignty requires that Lebanon maintain a monopoly on the use of force within its territory. It has not done so; consequently, the claims of sovereignty ring hollow. There are really only two plausible explanations: either Lebanon is allowing Hezbollah’s attacks in which case they’re a belligerent or they’re unable to stop Hezbollah in which case they’re not sovereign.

Both commenters have managed to say in very few words what the core issues are. Of course, in our anxiety, words help to stem the flow of uncertainty and our fear for the innocents in harm’s way, so we continue to read obsessively, hoping for some magic words of surcease to appear on the screen.

Meanwhile, there is, faintly on the horizon, the possibility of change, for I am reading, with surprise, the usual suspects say some unusual things. Here, for example, Saudi Arabia , of all countries, has criticized Hezbollah:

In a significant move, Saudi Arabia, the Arab world’s political heavyweight and economic powerhouse, accused Hezbollah guerrillas — without naming them — of “uncalculated adventures” that could precipitate a new Middle East crisis.

A Saudi official quoted by the state Saudi Press Agency said the Lebanese Hezbollah’s brazen capture of two Israeli soldiers was not legitimate.

The kingdom “clearly announces that there has to be a differentiation between legitimate resistance (to Israel) and uncalculated adventures.”

The Saudi official said Hezbollah’s actions could lead to “an extremely serious situation, which could subject all Arab nations and its achievements to destruction.”

“The kingdom sees that it is time for those elements to alone shoulder the full responsibility for this irresponsible behavior and that the burden of ending the crisis falls on them alone.”

“The Kingdom” is also offering the Lebanese government some financial aid. The magnificent sum of fifty million dollars – this from a country whose 2005 GDP was $ 338,000,000,000. I suppose we should be glad they’re that stingy. Who knows how much of that “gift” will wind up in Hizbullah’s armory?

Meanwhile, I offer a prayer of gratitude for the blogosphere, for being able to read across the spectrum of opinion on this inevitable, here-at-last war. However grim the news, the light the ’sphere sheds on the situation at least provides us with enough information to make up our own minds as to how things “ought” to be.

So, thank you Rick and Dave for your astute summations. We are fortunate to have you as commenters.

13 thoughts on “Sovereignty, Terrorism and Those Caught Between”