Nabucco Opens the Gates of Vienna.

That’s the actual title of an article in the July 12th edition of Turkish Daily News.

Nabucco is the title of an opera by Giuseppe Verdi. It’s the Italian version of the name of the Babylonian king, Nebuchadnezzar.

Nabucco is also the name chosen for a natural gas pipeline planned to run from the Caspian Sea to Western Europe. The disagreement between Ukraine and Russia over their natural gas pipeline earlier this year drove up the price of natural gas and forced Europe to consider alternative energy supply routes. The Nabucco project was the result.

Here’s a summary from a few weeks ago in Pravda:

Energy ministers from Turkey, Bulgaria, Romania, Hungary and Austria signed an agreement to build the Nabucco gas pipeline at a meeting in the Austrian capital Monday, Austrian media reported.

Construction of the pipeline is scheduled to begin in 2008, with the first gas expected to start flowing in 2011, the Austria Press Agency reported. Construction is expected to cost between Ђ4.6 billion (US$5.8 billion) and Ђ5 billion (US$6.3 billion), according to APA.

Below is a map of the proposed route: 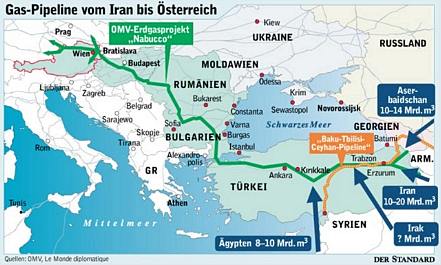 As you can see, the Turks are hoping that natural gas will make up for the failure of their Janissaries to breach the Gates of Vienna.

The Turkish Daily News has this commentary:

The negotiations Turkey is conducting with the European Union to become a full member of the bloc will still be taking place by the time the pipeline is operational in 2011, as planned. Experts indicate that the Nabucco project, so highly valued by the EU, will at that time be even more loaded with meaning and will become a key factor in the membership negotiations with Turkey.

So, obviously, Turkey is looking to use the Nabucco pipeline as extortion leverage in negotiations with the EU.

I’m not sure even the promise of cheap natural gas will be enough to induce Europe to accept a potentially huge influx of Muslim migrants coming in through a newly unguarded Turkish border.

And look at the route of the pipeline. Do you think it will be safer than the one through Russia and Ukraine? It would be a tempting target for the mujahideen whenever EU policies displease them. Just imagine the possible protection rackets.

The northern route is vulnerable only to the whims of Vladimir Putin and his successors. But if an Islamist party were to be elected in Turkey…

After Nabucco, Europe’s attitude towards Israel can be expected to become even less friendly, if that is possible.

I don’t think the choice of name for the pipeline is an accident. Verdi’s Nabucco, after all, follows the tribulations of the Jews after they are attacked and subsequently exiled from their homeland by King Nebuchadnezzar.

For once, Muslims look with favor upon a tyrant from the jahiliyah.

7 thoughts on “Nabucco Opens the Gates of Vienna”