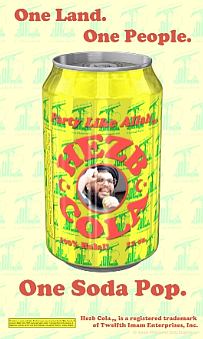 Yesterday’s humor post prompted a number of responses from readers, offering their own jihad-related humor for our enjoyment.

There are a lot of good links in the comments section of the post, too many to list here. Take a look at them if you feel like having a good laugh.

But I want to pass on a couple of audio links that came in by email. First there’s a 15-second commercial spot for Hezb Cola by Karridine, the resident genius at Brain Surgery With Spoons. Expect to hear it on the radio tonight, jammed between the latest hits from Eminem and Madonna on your favorite Top 40 station!

Second is “Patrick Henry” who has composed some snappy little numbers that you really don’t want to miss. His most recent is “Hey, Bin Laden”, which is too short to quote from without spoiling the jokes.

But here’s a snip from an earlier masterpiece called “It’s in the Koran”:

Make sure to listen to the energetic tunes that go with these lyrics — they’re great.

Being a clearinghouse for Mock-the-Muslims humor is a job that I can enjoy.

7 thoughts on “Give Me Hilarity or Give Me Death!”