My previous post about Dr. Seuss’ anti-appeasement cartoons from 1941 caused a lot of discussion in the comments about how much of a Red Dr. Seuss really was.

…it wasn’t just that Geisel was pro-Stalinist-as-ally, he was largely pro-Stalin. Of course, that’s before the revelations about Ukraine and such got past Duranty and The New York Times gatekeepers.

DWPittelli followed up by asking an important question:

The cartoons were all from 1941, you say. Were any of them from before June 22, 1941, when Germany invaded Russia? If not — if they all followed that date — then they are evidence that Seuss was motivated by the Left, if not a leftist himself.

This morning the intrepid Wally Ballou located a selection of Dr. Seuss’ depictions of Uncle Joe himself:

Hmm — if you search the collection for images of Stalin, you can’t help but think Dr S was very highly disposed towards him. Most are of the “kindly Uncle Joe gives it to the nazi rats” variety, but check out the Feb 19, 1942 offering for out-and-out pro-Soviet feeling…

After all, Stalinst anti-semitism was no secret, but like many liberal Jews, Geisel was able to overlook it. 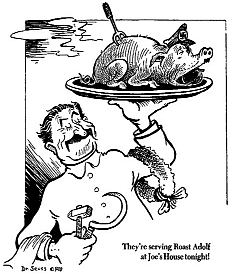 Here’s one of the depictions of Beloved Uncle Joe, from Dec. 24, 1941 (to see full size versions of this and the other cartoons, click on the image itself). Some of the others from the same period are equally creepy.

But answering DWPittelli’s question is important — was Dr. Seuss a Stalin fan before Barbarossa? If he was a party-line Red, he would have been opposed to any intervention before June 22, and then would have quickly switched sides.

Fortunately, the Mandeville Special Collections Library at the University of California at San Diego has a very well-designed set of overlapping indexes on the Dr. Seuss collection, including a chronological one. 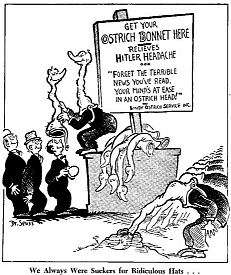 Check out the whole collection, and it will become obvious that Theodor Seuss Geisel was no Stalinist. If you work your way through 1941, the evidence is clear: Dr. Seuss was in favor of intervention against the Axis long before Hitler turned on the USSR. The cartoon at right is from April 29, and his meaning is clear: America is foolish and blind not to deal with the Nazi danger.

All of the early 1941 cartoons have the same message, which was basically the FDR stance. 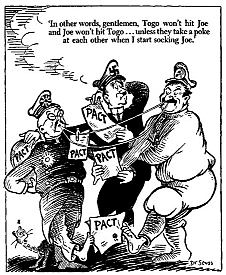 The most telling evidence that Dr. Seuss was no fan of Stalin is this cartoon, from June 20, just two days before Barbarossa. Stalin is shown as a crony of Hitler’s, one of the three dictator pals. The Stalin hagiography came later, when the USSR was our ally, and was standard practice in American popular culture for the duration of the war effort. Yes, Dr. Seuss seemed to go a bit over the top with his depictions of Stalin, but that was his modus operandi in all his cartoons.

He was, after all, following the FDR party line. In his later years, when he took up pacifism, anti-capitalism, and tree-hugging, he was doing the same thing: following the party line of the Democrats as they flushed themselves down history’s toilet.