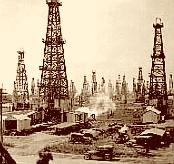 In a couple of posts last week, when I was feeling cynical, paranoid, and pessimistic, I wrote about the possibility that the Saudis had shortened the Bush administration’s chain, and that the fix was in: a deal was being cut on Lebanon to satisfy the Desert Masters, and the screws were thus being appropriately applied to the Israelis by the Secretary of State.

My supposition was that the Saudis can control the price of oil at the margin by a modest lowering of their production, and the threat of such an action is enough to bring the leaders of the West to heel.

This assertion brought in a lot of interesting comments. One of our new commenters, “Economics” Scott (to distinguish him from “Armchair General” Scott), is entertaining and well-informed on the topic of oil production and distribution. I’m reproducing his various comments here, with some redaction for clarity:

The Russians have been outproducing the Saudis 3 to 1 since the mid 1970’s.

Add in every tinpot dictator with oil, and the now, domestic concerns for drilling, They would all LOVE to get ahold of $5 per gallon gasoline and drill like hell.

Oil margins are volatile, so are the market economies of the west. Inflation adjusted, we are just getting back to market prices for oil we had in the early 1980’s $28/bbl in 1983 translates to $68-$70 barrel today.

The price in 1983 supported enormous wildcat exploration and brought known marginal fields BACK into production.

U.S. may have 30 billion barrels in known offshore fields yet to be drilled not to mention what is in the Santa Barbara Channel and the one year supply in Alaska.

Having said that, If the price is right worldwide, IT will be drilled. And the push worldwide for energy diversification would accelerate and cut into oil by up to 30% just that much faster — ultimately what the Saudis fear, (expect the 25,000 member Saudi Family to take up residence in the West sometime in the next half century)

Those who fear (the appeasers) an economic crisis like the early 1980s, the Saudis included, are mainly the bankers, investment houses, and those who trade in short term fear politically.

A deep recession of about a year, a lot of bankruptcies to squeeze out the record personal and business debt of the west would do a lot of good in the long run provided inflation could be held in check.

If Iran’s oil production could be destroyed as new oil fields come online at the end of that shortage, it would be beneficial.

Then Hezbollah gets starved, the Mullah thuggocracy gets starved, and there would likely be a short nasty civil war in Iran between elements of the Iranian Revolutionary Guard and the Regular Military for control of the nation’s internal assets. It might turn out good or bad. The Pasdaran has a lot of weapons.

But high oil prices are not a bad thing, just painful in the short run… like everything that is ultimately good for you after a hangover, like eating right and regular trips to the gym, it hurts but it does a world of good.

You are fixated on this year’s “Spot Market Price”.

Lots of OIL, most, bbbbbbillions and bbbbillions will be bought and sold on long term contracts, not month to month, based on today’s tight supply price, which could stabilize at a higher price yet.

True, quintupling the price of the “marginal oil sold outside” long-term price would make it just too costly for those buying at their maximum energy budget to pay.

This would ease demand, prices would stabilize or moderate, find another 20% world reserve in oil supply and Iran is irrelevant. If you like then Dear Baron, invade or bomb them in the short run it won’t affect price as long as those Hormuz straits are secure.

But fear not, we lived through the “Peanut Farmer from Hell as President” who fired his whole cabinet in one night, Sheesh! then the next week… double digit interest rates, double digit inflation… and the rousing “Malaise Speech” and his Malaise Index because you weren’t feeling guilty enough for being an American. Leadership does matter, it IS the economy stupid.

Fear not! In four years, billions and billions of new reserves will have been found, drilled.

AND even more oil “reserves” engineered, I hear those Japanese hybrid cars are getting 50 mpg and they’re selling them to us at a loss, and still putting on a third shifts in that production line.

Here’s your back of the napkin Int’l Oil Supply and Demand lesson from Business Week.

World excess capacity at 2%? No wonder price is high and will stay there (dang that new Chinese Middle Class and Indian Yuppies discovered Toyotas and Hondas and Beemers).

New drilling will occur on a MASSIVE basis worldwide, want to get the HIGHEST paying Master of Science in the next five years, young man?

If you’re truly so “werry worrwied”, you may want to learn how to farm forty acres; get a draft horse and a good mule …. as a personal economics go, consider it a long term investment in the future.

Oh, and be sure to stock up on NATO 7.62 ammunition, a few thousand rounds in your personal wine cellar ought to save you a lot of money when DEMAND goes way up.

You think capitalist pig democracies will cry uncle with a little too much pain.

Hugo is ruining some of the best reservoirs in the world … Through “Socialist Command Oil Engineering” e.g. he commands it to come out of the ground and to increase !

— “From monitoring El Universal, A.M. Mora y Leon @ Publius Pundit surmises “that the U.S. needs to prepare for an oil cutoff from Venezuela” due to the “socialization” of that country’s oil industry, courtesy of Hugo Chavez: “[T]he country [is] running its oil industry into the ground with fires and accidents, something that’s never occurred until these Chavista years, a result of the firing and blacklisting of all of Venezuela’s talented and dedicated engineers and managers — who have since been replaced by Chavista operatives known for their political loyalty and not their expertise…”

Expect wars and higher oil prices before they moderate.

Expect massive worldwide drilling. Prices have supported wildcatting for 6 months with only a 2% world pumping capacity as a buffer.

Dear Baron, sometime between 2010 and 2012 Expect 20% Excess Worldwide reserve capacity, then you can do anything your imperialist heart desires to Hugo Chavez and Mad Jad of Tehran as long as you keep those Straits of Hormuz open; it won’t affect oil prices or what the Saudis want much at all.

I’m a layman in economic matters. Although I have read Friedrich Hayek and Thomas Sowell and Walter Williams extensively, my eyelids droop and I tend to drowse off when the text drifts into heavy economic nomenclature.

As a result, all my assertions and opinions are inherently questionable.

Fortunately, we have some experts among our readers, including the formidable Starling David Hunter, so I am sure that my mistakes will be detected and corrected very quickly.

As far as the price of oil is concerned: Scott, I’m with you. Let it rise to the point that the market will bear, and then there will be enough to satisfy the demand. New reserves will be drilled or extracted from shale, or we’ll start converting garbage to fuel, or we’ll find alternative sources of energy. Things will be rocky for a while, but in the end we’ll all be better off.

But that’s from an economic standpoint. If economics were all that had to be considered, we would never have had subsidized ethanol, or oil price controls, or “windfall” taxes, or any of the other stupid productivity-suppressing stunts that the politicians are always foisting on us.

My point solely concerned the political impact of massive increases in gasoline prices.

Come the first week of November, this Administration does not want voters to be paying $10 a gallon for gas. No incumbent congressman wants his constituents pulling the lever after paying $150 for a fillup in order to get to the polling station. A politician who allowed that to happen would be forcing himself into early retirement.

So, if I’m right about the Saudis being able to drive up the price of oil significantly by modest production cuts at the margin, and if they were to make not-so-subtle hints to the Bush administration that this was about to happen if the Israelis were to overrun Lebanon and destroy Hizbullah and the Assad regime, then… Well, I suspect that a “peace” deal would be cut rather quickly.

The Israelis lose another pound of flesh; Kofi Annan presides over the process; smiling photo-ops are put together for all the leaders involved; the NYT gives it breathless coverage — you know the drill; we’ve been through it all so many times before. It makes me sick to my stomach just imagining it.

Now: if something like this is not going on, then:

I’m willing to entertain some rational and diplomatically expedient reasons for the above behavior. But Occam’s razor tells me that it must be the ability of the Saudi regime to put a thumb on the jugular of the world’s oil supply.

And, contrary to what the Halliburton-hating moonbat Left would have us believe, high oil prices do not appreciably benefit the oil companies. They do not make significant additional profits, because most of the extra money goes into the pockets of King Abdullah and Mad Jad and Prince Hugo. The constriction of demand that accompanies higher prices is not useful to businesses that sell oil for a living.

What the oil companies (and governments and banks) want is price stability. Let the price go up if it needs to, and then stay there for a nice long time. Price fluctuations discourage investment, exploration, and new technologies, because nobody has any good idea whether the expenditures will bear fruit when they mature in two or five or ten years’ time.

And price stability is what the nutcase Islamist regime in Iran seems determined to prevent. My guess is that the Saudis would like nothing better than nice, stable, moderate oil prices, so that they can continue to buy their booze and their blondes and their Ferraris without worrying that some wildcat Texan is going to figure out how to extract oil from sand in a cost-effective manner and put them right out of business.

OK, boys: now tell me all the different ways I’m wrong. I’m ready to hear it.