Always On Watch has a post on the members of Hamas who have been educated in the halls of higher learning in the United States. The list is enough to make you xenophobic, angry, and fed-up with the administrators of what passes for our system of higher education. American taxpayers helped fund the “education” of these moral cretins – at least the part that Saudi Arabia’s deep pockets didn’t take care of. 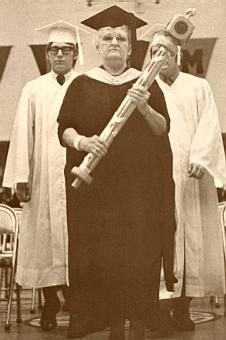 Go see the post, and let’s talk about why all the trillions of dollars in oil money aren’t being spent on free universities in the Middle East so that its citizens can come out of the Middle Ages. Let’s have them do it over there where they can murder one another over there.

But who, even the devotees of Hamas, wants to go to a school where the best you can do is a major in the minutiae of Islamic Studies? When you’re done, no doubt you can count the devils on the head of a pin, but what else can that kind of academic focus prepare one to do? Nope, in order to take over the world you need a technical, Western education.

Don’t you wonder how many of those ammonium-nitrate wielding Canadians went to Canada’s colleges? That is, in addition to their vocational training in Pakistan, de rigueur for any self-respecting terrorist scumbag.

One can only hope that our domestic intelligence bureau has the names of every single Middle Eastern student in its files — not to mention the reactive, offensive-and-easily-offended Muslim student groups on our college campuses.

I haven’t checked, but I’d be willing to bet that there’s a correlation between the number of Muslim activists in a given college (or the amount of Saudi money flowing into the college’s coffers) and the level of free speech operating there. Islamic money and free speech are not willing bedfellows. Just ask ex-Professor Klocek, formerly of DePaul University.

10 thoughts on “We Educate Terrorists”