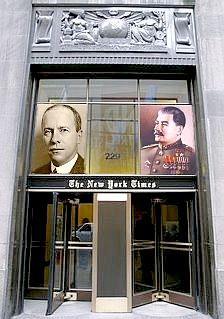 That’s what Larry Kudlow calls the New York Times for its latest criminal release of information re the United States’ attempt to track terrorists and to protect the integrity of our country.

That royal appellation is a much nicer title than this treasonous, duplicitous, hubristic, and deeply biased yellow rag deserves for its ongoing treachery.

The New York Times has been undermining our country for years. In the past we could ignore it – “the past” being pre 9/11. Sure, they had their traitors like Walter Duranty and their prevaricators like Jason Blair, and their ignorant “economists” like Paul Krugman (Somewhere there may be an economist with a worse record, but if there were, surely the Old Gray Whore would have had him/her on board by now. But Krugman is so thoroughly and frequently wrong that he couldn’t survive outside the Times or some soft spot, equally removed from reality, in academia. Just to keep the record straight, some blogs even keep a running record of his idiocies, mistakes, and ignorance).

Larry Kudlow sums it up:

The saboteurs at the Times provided secret details into the Bush administration’s use of subpoenas to gather large troves of data from the Society for Worldwide Interbank Financial Telecommunication (SWIFT), a Belgium-based consortium that handles international bank transfers. Financial data is used to identify terrorists before they get a chance to kill. It is an eminently sensible program, and one that has reaped rewards.

In one instance, the SWIFT program was used to capture a top Al Qaeda operative, Riduan Isamuddin, in Thailand in 2003.

The folks running the printing presses at the Times don’t seem to care about any of this. They went ahead and made the determination that the SWIFT program was “a matter of public interest.”

President Bush met with the press in the Roosevelt Room this morning. He had something to say about the resident enemy journalism in New York City:

Q: Sir, several news organizations have reported about a program that allows the administration to look into the bank records of certain suspected terrorists. My questions are twofold: One, why have you not gone to Congress to ask for authorization for this program, five years after it started? And two, with respect, if neither the courts, nor the legislature is allowed to know about these programs, how can you feel confident the checks and balances system works?

THE PRESIDENT: Congress was briefed. And what we did was fully authorized under the law. And the disclosure of this program is disgraceful. We’re at war with a bunch of people who want to hurt the United States of America, and for people to leak that program, and for a newspaper to publish it does great harm to the United States of America. What we were doing was the right thing. Congress was aware of it, and we were within the law to do so.

The American people expect this government to protect our constitutional liberties and, at the same time, make sure we understand what the terrorists are trying to do. The 9/11 Commission recommended that the government be robust in tracing money. If you want to figure out what the terrorists are doing, you try to follow their money. And that’s exactly what we’re doing. And the fact that a newspaper disclosed it makes it harder to win this war on terror.

Such criticism is necessary but not nearly sufficient. With all due respect, Mr. President, it is time to call in some favors. It is waaay past time to sic Congress on this seditious, disgusting bunch who are so tightly focused on your ruin that their snipes never sleep. You must lead a miraculously sinless life, because if there was one iota, one scintilla of scandal, they would’ve found it by now. Since they can’t bring you down that way, they’ll bring the house down around the rest of us in their deranged fervor to destroy you.

Gabriel Schoenfeld gave his opinion to the New York Sun on this latest revelation:

“They’re courting prosecution. … They’re increasingly behaving like if we were in the middle of World War II and they learned of plans to invade Normandy. Because they decided it’s a matter of public interest, they’d publish it,” Mr. Schoenfeld said. “I think this is reckless and likely to encourage Attorney General Gonzales to prosecute them, if not for this story, for some of the other things they’ve done.”

Mr. Schoenfeld said that the latest disclosure by the Times about the financial surveillance was less clear cut as a legal violation because it did not appear to involve communications intelligence, which is specially protected under federal law.

Mr. Schoenfeld said the new report would increase anger against the paper. “They really are testing the limits of congressional and executive branch patience. There’s a lot of displeasure with what they’re doing,” said Mr. Schoenfeld, who edits Commentary magazine and writes a weekly column on chess for the Sun.

However, the editor said he still considered a prosecution unlikely, on balance. “I’m not sure the Bush administration has a stomach for a fight with the media of that magnitude, but it’s become more and more clear that it’s necessary,” Mr. Schoenfeld said.

Well, some members of Congress may indeed have “the stomach” for this overdue confrontation:

Of course, not every member of the Imperial Elected Capitol Hill agrees with Representative King. Thus, the usual suspects, like Senators Biden and Specter, are putting their fingers up to test the political wind. They are no better than the perfidious Times. And more scared of the MSM than they are concerned for this country’s integrity. Scurrilous, that’s what they are. Combined with the Times, and other elitists, they are concerned to bring this President down – and if the US goes down, too, hey… that’s the breaks, huh?

The New York Times is blinded by its hatred of George W. Bush. And, because of this, these boneheads compromise the lives of all Americans.

Here’s the link to research your congressman’s or senator’s position, or simply to register your desire to see the Old Grey Doxy and her companion yellow journalists brought to heel before they literally kill us all.

8 thoughts on ““The Queen of Saboteurs””