In the cast of characters from the Danish Motoon controversy, the name Kåre Bluitgen is not as well known as that of Kurt Westergaard (one of the cartoonists), Flemming Rose (editor of the newspaper Jyllands-Posten, which published the cartoons), or Anders Fogh Rasmussen (the Danish prime minister, who displayed a spine of tempered steel in the face of Islamist threats). But Mr. Bluitgen is the man who started it all.

He had written a children’s book about the life of Mohammed, and was having trouble finding an illustrator for it. Danish artists were mindful of Theo Van Gogh and Salman Rushdie, and were reluctant to touch Islam with a ten-foot pole.

And with good reason. Jyllands-Posten solicited cartoons of Mohammed from Danish artists, and published twelve by artists willing to participate. The resulting violence has left a number of people dead, and forced the cartoonists into hiding.

Well, somehow Mr. Bluitgen found an illustrator, and his book was eventually published. Unfortunately, not all Danish schoolchildren will be able to read it. According to last Thursday’s Ekstra Bladet (kindly translated by reader Zonka):

Several school libraries will not let the students borrow the most talked-about book this year — Kåre Bluitgen’s The Qu’ran and the Life of the Prophet Muhammed (Koranen og profeten Muhammeds liv).

The Danish daily Kristeligt Dagblad today reports that several Danish school libraries are keeping Kåre Bluitgen’s book about Mohammed off the shelves and away from the school kids. 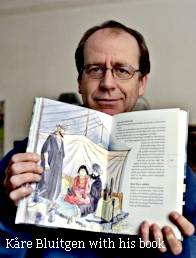 The book that inspired Jyllands-Posten to print the Mohammed cartoons has sold more than 7000 copies since it was printed in January, and has had good reviews, even in the school libraries’ own newsletter, which described it as “a gift to all school libraries both for Muslim children and the rest of us”.

Still, many school libraries are hesitating to put the book on the shelves, and in other places it is kept away entirely. At the school “Parkskolen” in Struer, where the book has been bought, it is only for the teachers’ library, says Kristeligt Dagblad.

“It is not because of the Mohammed controversy, or that we want to exercise censorship, but it is a very violent book, and if it is read without conversation with an adult, it will give a wrong impression of Islam, not the least the Muslims’ view on other religions. Therefore we have chosen to let the book be for the teachers, who then can use parts of it in the classes.” says school librarian Søren Langkjær, who hasn’t chosen to leave the Bible off the shelves!

“Yes, the Old Testament contains a lot of tough stories as well, but I don’t think that it will be read as an image of the religion in the same way as it would in the Mohammed Book.” says Søren Langkjær.

Hellig Kors Skolen on Nørrebro in Copenhagen has not yet bought the book, and don’t expect to make it available for the school’s students either, where 80% are immigrants.

Kåre Bluitgen himself, finds it hard to understand the libraries.

“If there is anything wrong with the book it is rather that it is not critical enough about Mohammed, since I have only used the traditional Muslim sources. And when you see that the libraries have no problem with the Bible, it seems like a misplaced consideration for Islam.” says Kåre Bluitgen.

Make a note of this explanation: It is not because of the Mohammed controversy, or that we want to exercise censorship, but it is a very violent book.

But how could that be true, when it is based on the scriptures of the Religion of Peace?