This past Friday, June 16th, was designated “The Day of the African Child” by UNICEF and the Board of the African Union. CNN dutifully ran an agitprop piece from IRIN, one of the innumerable sub-sub-bureaucracies of the Mother of All Bureaucracies, the United Nations.

The children in Africa are vulnerable, see? And it’s your job to pour money into the coffers of the UN, UNICEF, NGOs, and the like, in order to save these kids from the daily horrors they face. The implication being, of course, that the money will solve poverty, and solving poverty will save the children. At least, that’s how it’s supposed to work.

Does anyone besides Bill Gates, the Left Coast film industry, and those white SUV-driving NGO employees believe the boilerplate manufactured on “the behalf of children” by quasi-media outlets like the UN’s mouthpiece, IRIN, i.e. The Integrated Regional Information Networks? Does anyone have the bottom line total on the billions that have been wasted on behalf of the eternally exploited children? Is there any way to quantify the superfluous rhetoric and mind-numbing bloviation devoted to The Children?

In May 2005 there was a conference entitled Violence Study: West and Central African Consultations, the immediate purpose of which was to “train journalists” in their reporting on children. According to one speaker,

Parents, traditional village chiefs, organisations and the media must work together to maximise children’s participation and emancipation. [my emphasis]

So they’re not going to protect the children, they’re going to “emancipate” them. A brilliant idea, first current in the 1960s. It didn’t work then, and it won’t work now. Children are immature beings who need guidance and protection, not liberation. That is, unless the speaker meant emancipation from the long interfering arm of the UN, with its collectivist agenda and its pedophile peacekeepers.

But that was May 2005. This year, African children get a whole day set aside in their honor. And why June 16th? Because it is the anniversary of the 1976 shooting of children protesting apartheid in Soweto. But why South African children? Because the white people were villains, perhaps? Why not pick something less racially fraught, and more historically honest? Yes, white South Africa’s government was shameful, but it doesn’t begin to compare to what black Africans have done to one another — or white people, for that matter — in the name of tribe, religion, ethic group, or race. Whites aren’t even in the same league. After all, they let Nelson Mandela live, for heaven’s sake. And does Desmond Tutu think he’s alive because of his fellow black Africans?

Never mind. The UN soldiers on, dredging up busy work for itself as The Children continue to be exploited, used, abused, and then disposed of. And who is better at that than the UN peacekeepers? 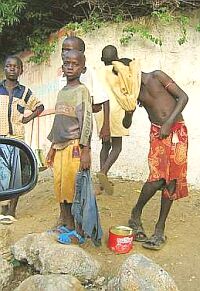 Meanwhile, the MSM wallows behind, picking up these stories the UN drops like handkerchiefs, and they retail this news as though it were Truth. Sad vignettes of abused, exploited children rescued by NGOs (presumably funded by the UN) are accompanied by factoids about the African environment vis-à-vis its children. All of this is in turn followed by earnest exhortation about the “obligation” to find out why there is an increase in domestic violence against women and children.

And M. Legrand’s conclusion about all this? It’s because “poverty is on the rise.” Well, duh. However, even M. Legrand has learned that attempting to eradicate poverty is not sufficient. As he lamely attempts to explain it:

We need legislation, and enforcement of that legislation and all the necessary social services.

Yes, he really said that. What he meant was — surely, he meant to say — that Africa needs a society of laws, and consequences for breaking them. The laws need to apply from the top down, starting with the kleptocrats and the bureaucrats and the fatcrats who siphon off Africa’s resources.

Africa most certainly does not need more social workers. Please, God, no social workers to further gum up the works. Africa needs another layer of do-good bureaucracy like it needs more malaria, another plague like AIDS, or New Orleans needs another hurricane.

Africa has many child-hostile traditions and practices. IRIN has the stories here, here, and here. You can read them if you want, but know this: You’re being manipulated by charity-porn, which is meant to elicit your guilt and separate you from your money. Yes, the suffering is awful, but donating to UNICEF won’t change that, and the illusion of helping these kids can only prolong their exploitation.

What would be the best thing for African children? To have the UN disappear.

16 thoughts on “Children in Danger From the UN”