Reader Zonka has translated this editorial from Ekstra Bladet, June 12, 2006:

Bertel Haarder (Venstre) told Morgenavisen Jyllands-Posten, yesterday that he has changed his behavior: 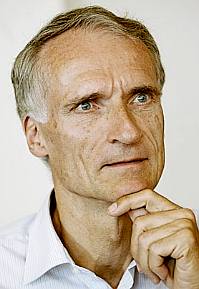 “We have all learned from the Mohammed Crisis so that we now exercise self-censorship, or at least think carefully before making any statements. There are things that I would have said previously, which I’m not going to say today. I believe that this is true for all of us!”

One must reach the conclusion that the Minister of Education and Church previously didn’t think carefully before making a statement, but he does now, and nobody can oppose that.

Bertel Haarder’s reason for limiting his statements of opinion is, on the other hand, hair-raising.

He believes the same things as before. He just keeps them to himself. Not because of the feelings of religious people. Not out of respect for other people’s beliefs.

The minister of education in Denmark has put a gag on himself, because he doesn’t want to expose himself to threats from rabid Muslims. He would rather not have to live under police protection, as several of his colleagues from Parliament have to.

Most people can empathize with Bertel Haarder’s feelings. Police protection is a daily reminder of one’s own vulnerability, and the worries of the minister don’t arise out of thin air, either. Ekstra Bladet revealed a little under a month ago that the Association of Islamic Belief (Det Islamiske Trossamfund) has a hate list, at the top of which Bertel Haarder’s name can be found.

Now the Muslim extremists can chalk up another victory: the threats are working.

Bertel Haarder underscores the fact that, of course, he still holds steadfast, when it’s about important issues. But that is to no avail.

Freedom of speech in its nature is the same freedom to offend. So far nobody has yet been punished for talking about the weather.

The right to free speech is the quintessential right of freedom, and it is not given by nature. We can only defend it by using it. We can choose to keep our opinions to ourselves not to hurt others unnecessarily, but if it’s done out of fear against threats, then we have abandoned the fight.

A lot of people have been busy declaring that the freedom of speech in Denmark isn’t threatened. This is a lie. Nobody binds our mouth or our hands, this is true, but it’s not necessary either if we do it ourselves.

Bertel Haarder has capitulated, and according to him he is not alone. Which is both sad and scary.

Remember: Denmark is the least Islamized of the European countries with large Muslim minorities. Denmark has so far resisted mightily the incursions of Eurabia. Its Prime Minister, Anders Fogh Rasmussen, refused to give in to Islamist demands, and will not be mau-maued into dhimmitude.

But, as Wilfred Owen said, Courage leaked, as sand/From the best sandbags after years of rain. Drip by drip, the violence and threats of violence have their effect. The murder of a filmmaker here. The capitulation of the Minister of Education there.

Our freedoms will not be taken from us: we shall relinquish them voluntarily.

What’s happening in Denmark may not come to America until next year, or next decade. It may take a generation. But make no mistake: it will get here.

We have been warned.