Tell me again about Europe and her pains,
Who’s tortured by the drought, who by the rains.
Glut me with floods where only the swine can row
Who cuts his throat and let him count his gains.
It seemed the best thing to be up and go.
— From “Aubade”, by William Empson

There are so many degraded behaviors and beliefs in our culture that attempting to delineate them quickly devolves into the feeling that one is watching a train wreck in slow motion. Only this time it’s a disaster with many people you love and used to respect on board and there is nothing you can do to alter their zombie-like condition. In fact, you wonder if you can even save yourself as the train continues to plow on through, hurtling in your direction…and you’re tied to the tracks, directly in its path.

We keep comparing ourselves to Europe and her plight, hoping to draw some comfort from the fact that while we may be trying to divert this evil train from its rails, Europe’s train has long since wrecked and the bloody survivors are trudging down the road to oblivion.

Well, dream on. Whatever cultural superiority we can derive from that comparison is cold comfort when you look at the depth and breadth of the problems that face our republic. These are problems that ought to be able to be rectified in a country allegedly governed by and for the people, but who could have dreamed the form into which our imperial and corrupt governance has metastasized? It defies full comprehension, much less full discussion.

So I’m going to take, for the purposes of examination, one small piece of this poisonous, malformed tumor that has begun to pass for American culture: Christian religion. In general, aside from the secularized fraction of the intellectual elitists, Americans pride themselves on the fact that religion in the public square is still possible, and that the majority of us seem to profess some kind of belief beyond the Tivo selection in front of us.

But that belief is part of the problem, because the general direction of mainstream Christianity has taken a malign and destructive turn. In fact, it has become downright anachronistic on a number of levels. It used to be that the “fundamentalists” and the Catholic Church were the groups accused of looking back to some Golden Age where Christian values and behaviors reigned supreme. This view was considered anti-intellectual and the leading lights sniggered over their dry chablis at the collective stupidity and atavism of such fools.

Now it is the progressive, anti-knowledge intellectuals who long to return to a more pristine past, whether it be the peace and harmony of the American Indians Native Americans (and here’s a prediction: soon, the word “American” will be stricken from that term and some more politically correct, less hateful noun will be found to describe the descendants of those who made their way through the Bering Strait and began to settle here millennia ago. “Native American” will be added to list of Verboten Usage, where it will join Negro, Black, lady, etc) before the evil white man arrived, or the tribal coherence and tranquility of the African tribes before the white man dragged so many thousands to their deaths or to the living death of slavery in Amerikkka. And, of course, there is the paradisiacal, persecuted Cuba which, if we would only leave them alone, would blossom fully into the people’s heaven on earth. For some reason, China is no longer au courant in the paradise department. Too much truth leaked out, perhaps. Or maybe China, with its increasing appetites for technology and modern life looms larger as a threat than it used to for the utopian movers and shakers. China kills utopians; that information may have finally gotten through the elitist barricade erected against reality. It happens sometimes.

But there is another side to their nostalgic backward glances, though they have managed to find some half-plausible cover for their designs — which are as ancient as early recorded history and as new as today’s front page. And that nostalgia is concerned with the eradication of the Jews. The Joos. The Zionist Entity. The swine and apes. The sub-human ones. Don’t kid yourself: rabid anti-Semitism is alive and well in the higher reaches of American society. It has always been there, but only lately has it learned to cloak itself as something else.

One of the most appalling features of our cultural disaster is this anti-Semitism as it is currently practiced in mainline Christian churches in this country. The edicts, committee reports, and resolutions pouring out in the name of the poorpalestinians — for that is now one word among these leaders — all have the same goal. Their stated purpose is to alleviate the suffering of the poorpals, and their committees all seem to have anachronistically Marxist-sounding names with words like “Justice” and “Peace” and “Concern” in the titles. Just like the good old fronted Communist groups in the fifties, the ones aimed at labor groups and later at civil rights organizations. Let’s face it, the Communists stole all the good titles and now the churches must steal them in turn. They might as well, given that their goals are often similar, and equally malign.

Let’s call this posturing by the churches at least one of the things it is: willful blindness to the reality on the ground. A visiting Martian would ask what these Methodists and Lutherans and Presbyterians have been smoking to bring on this stone-blind demonstration of Jew-hatred disguised as Palestinian love. And the alien’s question might explain it all. That is, all the drugs ingested by these people in their youth (and now risen to positions of power) have left a residual brain damage. Instead of the cognitive deficits some substance abusers exhibit, church leaders seem to suffer from a sort of drug-induced cortical inability to parse moral differences. This deficit leaves them with an overweening need to find victims to whom they can show tolerance, while also searching for villains on whom to project the world’s problems. Enter the Jews, those eternal scapegoats that all the righteous Christians love to loathe.

Before the drugs arrived, the parents and grandparents of these church leaders had no problem discerning the need for a Jewish state. They were clearly able to see the valor of the remnant left after Hitler’s orgy and the world’s indifference, the remnant that made it to Israel and built a flourishing civilization out of desert and sand fleas. As waves of envious Arabs swept in to drive the Judenschwein into the sea, American aid and American good will cheered on the amazing efforts of the Israelis to stand fast in the face of such personally directed evil. After all, they were used to it. “Never again,” they said — and at the time they meant it.

No sane person questioned their strategy of holding onto parts of the territory the fleeing, defeated Arabs were forced to leave behind. After all, have not nations done that from time immemorial? It makes it harder for your enemies to attempt another attack. Not impossible, just more difficult. Large parts of southwestern America were acquired in just that way during our war with Mexico.

But that’s history, and Christian churches are weak on history, even and especially their own. Besides, can there be any doubt that Mexico’s histrionic envy is on the agenda for mainstream American churches? It’s a subject sure to be addressed after they’ve finished off Israel, our racism, and the victimization of gays. Yes, Mexico’s former territory is on the agenda all right; it’s just too far down the list to see as yet. First, there are all these other burning issues. 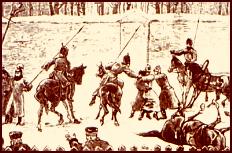 Leaders in our churches are working actively on the destruction of Israel under the guise of aid to the poorpals. In that respect, they are not one whit different from the righteous Christian hordes of old, with their pogroms and viciously dependable destruction of Jewish communities. Actually, there is one whit of difference: they are more sophisticated at disguising their homicidal projections onto their chosen scapegoats, tricking out their hatreds in the finery of brotherly love for the down-trodden, peace-loving poorpals. These are the same poorpals who kidnap Christian workers, torture and kill them, hold them for ransom, and destroy or desecrate Christian churches in the Palestinian Territories. These useful church idiots serve well in their masochistic piece of the sadomasochistic drama that Palestine plays with reality. In that respect, Palestine and American church leaders are equals. Neither of them is wired real tight to the facts on the ground. It is not in their interests to be so.

Ask yourself: what moral imperative informs the attitudes of these church leaders toward Israel? What is it that drives them to help obliterate the very root from which their churches spring? What in God’s name permits them to close their ears to the wishes of those in the pews, who disagree almost totally with their secularized, pomo vision. Where is the ecclesia in this witches’ brew of hatred, intolerant tolerance, and politically correct insanity? It is behavior which provokes one to ponder the reality of a personification of Evil out there somewhere, pulling the strings of a group of addled do-badders.

Ask yourself: who gave them the right to judge Israel and find it wanting? Is it the fact that Israel was the only democracy in the Middle East (and may return to that status if Iraq does not succeed)? Is their judgment at all connected to their similar judgments about America and her presence in the Middle East? And how do they manage to blind themselves to the presence of Hezbollah in Beirut or Hamas in Palestine? What part of “jihad” do they fail to understand?

Ask yourself: why Israel instead of Somalia or Pakistan or any of the miserable failed states where Christians are persecuted, driven from their homes without recompense and forced to convert? Why aim your sights at Jews when it is others who are killing Christians? What kind of emotional perversion leads to a situation in which those in authority do not feel called upon to speak up for their own?

Ask yourself all these questions, as I do, endlessly. If you come up with any responses that could possibly redeem behavior which seems driven by evil, hubris, or moral stupidity, please let me know. I could use some understanding here.

Meanwhile, as the Presbyterians vote, let me remind you that these whited sepulchers are giving a new meaning to post-Christian.

Let me also remind you that despite appearances, God is not dead. He is simply waiting for us to wake up and boot these money-changers out of the temple.