Sixth in an occasional series on the poetry of Louis MacNeice

One of Louis MacNeice’s most powerful and enduring works is “Autumn Journal”, a long poem of twenty-four sections. It was written in the fall of 1939 during the “Phony War”, the period after Britain and France declared war against Germany, but before the serious fighting began. 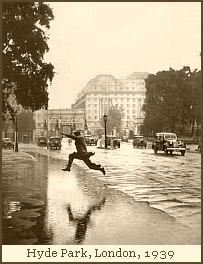 Gloom and foreboding were the order of the day in Britain. Everyone knew that terrible events were coming, but not just yet. While their governments prepared for war, people in Britain went about their normal affairs. The autumn of 1939 was the last time of normalcy that Western Europe would know.

Memories of the Great War were only two decades old, and the quality of Hitler’s war machine was well known, so a huge cataclysm was expected. A hint of this context is contained in the third and fourth lines of the excerpt below: the “raw clay trenches” that disfigured parkland throughout London were hastily excavated bomb shelters for the expected air raids, and anti-aircraft batteries could be seen throughout London. The Spanish Civil War, just recently ended, had demonstrated the effectiveness of the Luftwaffe, and Britain anticipated a horrific air war.

But in this excerpt MacNeice, who lectured in Greek at the University of London, takes a detour to the distant past, looking at the ancient world through the fatalistic lens of 1939.

October comes with rain whipping around the ankles
In waves of white at night
And filling the raw clay trenches (the parks of London
Are a nasty sight).
In a week I return to work, lecturing, coaching,
As impresario of the Ancient Greeks
Who wore the chiton and lived on fish and olives
And talked philosophy or smut in cliques;
Who believed in youth and did not gloze the unpleasant
Consequences of age;
What is life, one said, or what is pleasant
Once you have turned the page
Of love? The days grow worse, the dice are loaded
Against the living man who pays in tears for breath;
Never to be born was the best, call no man happy
This side death.
Conscious — long before Engels — of necessity
And therein free
They plotted out their life with truism and humour
Between the jealous heaven and the callous sea.
And Pindar sang the garland of wild olive
And Alcibiades lived from hand to mouth
Double-crossing Athens, Persia, Sparta,
And many died in the city of plague, and many of drouth
In Sicilian quarries, and many by the spear and arrow
And many more who told their lies too late
Caught in the eternal factions and reactions
Of the city-state.
And free speech shivered on the pikes of Macedonia
And later on the swords of Rome
And Athens became a mere university city
And the goddess born of the foam
Became the kept hetæra, heroine of Menander,
And the philosopher narrowed his focus, confined
His efforts to putting his own soul in order
And keeping a quiet mind.
And for a thousand years they went on talking,
Making such apt remarks,
A race no longer of heroes but of professors
And crooked business men and secretaries and clerks,
Who turned out dapper little elegiac verses
On the ironies of fate, the transience of all
Affections, carefully shunning an over-statement
But working the dying fall.
The Glory that was Greece: put it in a syllabus, grade it
Page by page
To train the mind or even to point a moral
For the present age:
Models of logic and lucidity, dignity, sanity,
The golden mean between opposing ills
Though there were exceptions of course but
only exceptions
The bloody Bacchanals on the Thracian hills.
So the humanist in his room with Jacobean panels
Chewing his pipe and looking on a lazy quad
Chops the Ancient World to turn a sermon
To the greater glory of God.
But I can do nothing so useful or so simple;
These dead are dead
And when I should remember the paragons of Hellas
I think instead
Of the crooks, the adventurers, the opportunists,
The careless athletes and the fancy boys,
The hair-splitters, the pedants, the hard-boiled sceptics
And the Agora and the noise
Of the demagogues and the quacks; and the women pouring
Libations over graves
And the trimmers at Delphi and the dummies at Sparta
and lastly
I think of the slaves.
And how one can imagine oneself among them
I do not know;
It was all so unimaginably different
And all so long ago.

Notice the gratuitous appearance of Engels midway through this excerpt. It was virtually impossible for any British literary work of the 1930s to avoid some mention of Socialism; it was the air of the times, and everybody breathed it.

But the poet has carefully avoided “presentism” in his depiction of the Greeks. In evoking antiquity, he has brought it to our understanding while at the same time demonstrating its inescapable otherness.

And so it is with 1939. Though it is scarcely two generations back, and many people now alive remember it still…

It was all so unimaginably different, and all so long ago.

4 thoughts on “The Dying Fall”