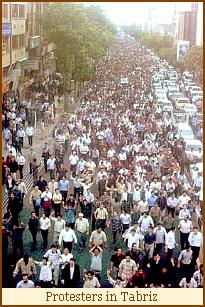 Michael Ledeen has repeatedly emphasized that the best way to achieve our policy objectives with respect to Iran is to support the indigenous opposition and thus undermine the regime. A spontaneous uprising against the mullahs, supported by the United States, could legitimize a new democratic government in Iran and make the issue of nuclear weapons less apocalyptic.

It may be that such an uprising is beginning right now. According to the expatriate Iranian blogger The Spirit of Man, students staged massive protest rallies in Iran today:

There are confirmed reports from inside of Iran about students protesting in and around the University of Tehran, mainly at Kuy-e-Daneshgah where famous protests against the regime were held in July of 1999 and June & July of 2003.

This can be a very important moment. I really think these guys need massive support right now to be able to achieve some thing, at least if we expect the change to come from inside of Iran.

A blogger says there are about 2000 students clashing with the security officers in western parts of Tehran where their campus is located. Many were detained, 40 police officers injured and 200 students wounded. He says, it started by a group of 20-30 students and then more people joined the crowd.

All we can do is stand on the sidelines and witness. Since the legacy media are unlikely to pay any attention, we’ll have to spread the word in the blogosphere.

8 thoughts on “Protests in Iran”