A reader sends a link to a site worth visiting frequently: The Skeptical Optimist.

This blogger has a Debt Clock, which in itself is an interesting thing. Our debt increases at an alarming rate, much faster than your heart beats.

But beneath this clock is….ta da…a GDP clock, and it appears to be ticking just as fast.

Below both clocks you will see a number. This is the Debt-to-GDP ratio. While the other two tick away, this number doesn’t seem to change.

All three numbers on the clock are updated two times per second: Debt, GDP, and Debt-to-GDP Ratio.

Unsurprisingly, the first number on the clock, Debt, is hard to keep up with, because it’s increasing so fast—just like it does on all the other debt clocks out there.

The second number on the clock, GDP, indicates the size of our economy. It’s just like the debt number in one very important respect: it’s hard to keep up with, because it’s increasing so fast. I bet you’ve never seen this before on anybody else’s debt clock.

The third number, Debt-to-GDP Ratio, is the most important number on the clock. It indicates our nation’s debt burden, and is very different from the other two numbers. Why? Because waiting for this number to tick up or down is worse than watching grass grow. Nevertheless, I do recalculate it two times per second, just like the other two numbers. 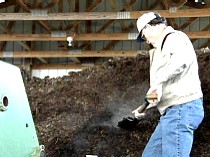 Here’s his definition of an optimist: one who believes that humans, on net balance, are builders rather than destroyers.

And go here for his International Debt Thermometer.

Definitely, a keeper. The Skeptical Optimist will be on our blogroll at the next update.

5 thoughts on “The Optimist Next to the Manure Pile”