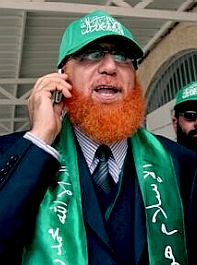 World Net Daily has excerpts of an interview with Mohammad Abu Tir, Hamas’ number two man. And Mohammad has some real news for a change, instead of his usual tirades:

United States churches are secretly run by Jews who converted to Christianity with the intention of controlling religious Americans including President Bush, a top Hamas official claims.

Well, that certainly explains the yarmulkes I’ve seen atop a few monsignors of late. And how about that white skullcap the Pontiff wears?

Is there anyone more powerful than a Jew? I’ll bet Superman was circumcised before he even landed on Earth. After all, Superbaby’s father was named Jor-El. Does that sound Biblical or what?

“I made a study and I know very well that all this radicalism in some parts of the Christianity, [including] the Anglicans who are being led by Bush, is because of the control of Zionists,” said Abu Tir.

The Hamas official, famous for his orange-dyed beard, went on to accuse “Zionists” of controlling Western media organizations and “leading terrorism inside the mass communications media.”

Bush is an Anglican?? Could’ve fooled me.

Of course Abu Tir is the same dude who tried to poison Israeli water supplies and spent twenty-five years in the slammer for his terrorist activities…so maybe he’s not the most objective of reporters.

On the other hand, he’s not much more outrageous than much of the brainstem media here. And he has that entertaining orange beard that he dyes with henna. Only Allah knows why.

Wait a minute! This guy thinks Anglicans are radical? Why? Because they can’t wait to join the other mainline churches’ divest-from-Israel schemes? Talk about biting the hands that feed you. If it weren’t for the useful idiots in the EU and the American churches, Palestine would be but a memory.

Which is why the national churches get not one shekel from me.

16 thoughts on “Insane or Ignorant? You Decide”