This is a case where the disease is certainly worse than the cure. However, when the proposed cure is the application of large amounts of US government funds, it’s time to yell, “Stop!” 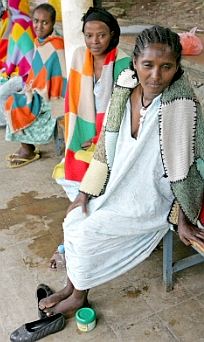 The medical condition under consideration is obstetric fistula. Back in the old days, in Victorian novels, where seemingly healthy matrons retired to their beds for good, often with a case of the “vapors”, what many of them most likely had was a fistula. Today, in developed countries, Caesarian sections prevent what would otherwise be a debilitating and depressing condition.

Here’s what happens in the complication from protracted childbirth:

An obstetric fistula develops when blood supply to the tissues of the vagina and the bladder (and/or rectum) is cut off during prolonged obstructed labor. The tissues die and a hole forms through which urine and/or feces pass uncontrollably. Women who develop fistulas are often abandoned by their husbands, rejected by their communities, and forced to live an isolated existence.

Most surgeons in this country never see a fistula. But the affliction cuts a wide swath through sub-Saharan Africa, consigning thousands of young women to lives as lepers. They smell. No one wants to be around them, and, in most cases, their babies are stillborn — healthy babies who simply couldn’t get out of the womb in time.

At the age of seven, a child should not have to even be bothered with knowing about her cervix. This child, Alem, is intimately acquainted with hers. Her doctors doubt she’ll ever bear children, though they believe that she will not be incontinent.

Back in June 2005, Neo-neocon posted on a similar story in Niger. I picked up her story, mainly to concentrate on how a father labored to raise enough money to get his young child to a distant hospital, one that was equipped to handle his daughter’s surgery.

This time the story concerns Ethiopia, where obstetrical and gynecological fistulas are common. The Washington Times features the Hamlin Fistula Relief and Aid Fund. This organization has several hospitals, and was begun in 1958 by two Australian doctors, Reg and Catherine Hamlin. Originally this husband and wife team went to Ethiopia to train midwives. However, upon seeing the plight of so many crippled and shunned women, their lives changed course:

They developed a delicate surgical technique that, in most cases, will result in a complete cure. Then they built the Addis Ababa Fistula Hospital. Since then more than 24,000 women have been treated and cured. The Hospital now trains doctors from other developing countries. The effect of their work is spreading world-wide, restoring new life and dignity of thousands of young women.

In addition to the Addis Ababa Fistula Hospital in Ethiopia, founded by the Hamlins, there is also a rural village, Desta Mender, for women who are so badly damaged that they cannot be completely cured. Not only are they ostracized elsewhere, their continuing medical care is essential.

In 2000, the hospital was given a parcel of 60 acres of rural land to build a self-help village for these women. With the help of Australian and Ethiopian architects, the village was designed and completed. Now the residents are being taught skills in farming and craftwork. The financing for this project came via Rotary International and gifts from Australia.

The Washington Times reports that:

Their efforts lately have drawn benefactors in the United States, spanning the political spectrum from conservatives to liberals.

In Congress, they range from Rep. Christopher H. Smith, New Jersey Republican, to Rep. Carolyn B. Maloney, New York Democrat, who are both attempting to win U.S. funding to treat the condition.

“No woman should have to live with this degrading condition,” says Mr. Smith, who proposes channeling $5 million through the U.S. Agency for International Development next year and $7 million the following year. His bill has passed the House and awaits approval in the Senate.

A rival measure, sponsored by Mrs. Maloney, would steer $34 million through the U.N. Population Fund (UNFPA), with the money earmarked exclusively for fistula care.

What is wrong with this picture? Two congressmen are duking it out to procure US government funding. The first, Rep. Smith, wants to channel the money through the US Agency for International Development (AID). Originally, when President John F. Kennedy introduced AID, he saw it as a temporary transitional agency. It was never intended to be permanent international welfare. Nonetheless, that’s what it is. Ten years ago the Heritage Foundation urged that we “abolish the wasteful Agency for International Development.” Unfortunately, it’s still with us:

Despite billions of dollars spent on economic assistance, most of the countries receiving U.S. development aid remained mired in poverty, repression, and dependence. In addition, AID lacks focus and, notwithstanding repeated attempts at reform, is poorly managed. Only a complete overhaul of America’s foreign aid programs will make those programs more efficient and effective.

Neither of these well-intentioned efforts should be allowed to pass the Senate’s scrutiny. At some point the pork-consumers have to go on a diet. Whether these women need care is not the point. Of course they do.

The objection here is the conduit of assistance. How much of these allocations would actually serve individual women? Imagine the “value-added tax” which would deduct “administrative costs” as the money worked its way to the hospital in Addis Ababa. How much would the hospital actually see? How much would be diverted into white SUVs for AID workers?

As for any money given to the UN for any humanitarian assistance, all we have to do is remember the UN’s “response” to the tsunami.

To quote one of their illustrious predecessors, they have not the right to do this:

We have the right as individuals, to give away as much of our own money as we please in charity; but as members of Congress we have no right to appropriate a dollar of the public money.

This project is not a debt. As such, it is not owed, and should not be paid. It is time to start trusting the generosity of individuals and private organizations. Again, we have only to look back at the literally overwhelming private response to the victims of the tsunami. How did that response come about? It happened because there were headlines above the fold in every American newspaper and 24/7 coverage on American television.

Representatives Smith and Maloney could start a fund-raising campaign among their colleagues in Washington. Then they could pass the hat to the hundreds of wealthy lobbyists who tug daily at their coattails. Next they could contact The New York Times, The Wall Street Journal, and their cronies at CNN, thus ensuring wide and relentless coverage of a horrible affliction.

The monies thus raised could be mailed in the form of the check made out to the Addis Ababa Fistula Hospital, c/o Ethiopia.

I am certain the hospital would be truly grateful for funds to help their patients, funds which did not require paperwork in triplicate. What a novel idea.

2 thoughts on “The Oxymoron of Government Charity”