The The Bloody Borders Project got widespread linkage, attracting a lot of visitors and bringing in a variety of comments. Most of them were supportive and constructive, but there was one notable exception.

Normally I don’t respond to such a negative attack; I just let the thing lie there like a turd on the sidewalk. After all, And Dymphna has already torn the poor fellow a new one in a subsequent comment.

But this particular one got me to thinking. So, first, here is what our esteemed commenter said in full:

I smell right-wing here and anti-Islam and plenty of prejudice. This is preaching to a crowd of people who…

Your research and graph is very nice but proves nothing, many of the acts of terror you talk of are carried out by a wide range of groups, not a single Islamic force. Many of these ‘acts of terror’ are in fact acts of freedom fighting, circumstances vary but you are genralising [sic] all the data to fit your view of this Islam vs Christianity tinfoil hat wearing madness you are clearly buying into.

Isolating this dubious data only enables you to fit it to your agenda and your agenda is one of the bigot, of capturing a whole religion in a nice, bit-size packet of hate that follows your personal agenda.

I’ll say this, I have no fear of Islam but a fear of the UK and US governments stealing the freedoms of their people away from them, of sending troops to die in a war that has no basis in fact, that reaks [sic] of expansionism, I fear a nation that shows no respect for International law and the UN (and no I’m not talking about Israel but I could be…) and acts as it sees fit, forcing a polarisation of beliefs on a global scale; making people choose sides rather than work together for the common good.

This post and others like it across the blogsphere only helps to push this ‘us against them’ agenda and feeds the fire of seperation [sic] and ignorance.

Well, he really told us, didn’t he?

Since I’m preaching to the choir here in the Vast Right-Wing Echo Chamber, I might as well let fly.

First of all, I didn’t realize I was trying to “prove” anything. I collected a huge mass of statistics and displayed them graphically so as to reveal as far as possible the underlying patterns. The terrorist attacks represented by these statistics were all carried out by Muslims with the avowed purpose of following the will of Allah. If anyone doubts that, look at the original sources for the figures, the news stories behind the stark numbers. 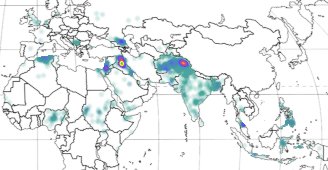 I guess all of the reporters and data collectors were lying right-wing partisans, inventing or slanting the “facts” to further their fascistic agenda. Or something like that.

Seriously, though, it’s in the realm of fact that during the last century no other religion — not Christianity, not Hinduism, not Buddhism, not Judaism — has anything approaching the record that Islam has for murderous attacks against innocent people. You have to throw in the brutality of the 20th century’s “secular religions” — Communism and Nazism — before you find anything comparable. And modern Islamism is giving the old commissars and gauleiters a run for their money when it comes to gratuitous killing.

But I don’t think our commenter would be so foolish as to deny that these attacks are done in the name of Islam or are as widespread as indicated by the map. It’s just that they’re not as bad as our crimes, as the Anglosphere’s brutal state terrorism.

And there is also our delusion that there is any connection between these disparate groups, our mass insanity that makes us believe that all of these attacks are somehow connected with one another. That’s probably our biggest error, blinded as we are by our mindless ideology of hate.

The Islamofascists bear more than a passing resemblance to the Communists of the mid-20th century. Consider:

As Donald Rumsfeld and Wretchard have often said: this is not a war of armies or munitions. It is a war of ideas, and will be won or lost in the journals and on the television screens of the West.

As soon as Communism consolidated power in Soviet Russia, it began its preparation for the World Revolution by establishing the Communist International. For the next sixty years or so the dedicated cadres and willing dupes of the Comintern took Soviet money, propaganda, and materiel, and used them to undermine and overthrow governments all over the world.

But Stalin did not directly command most of these operations. Even at the apogee of Soviet power, the Kremlin could only enforce its ukases in the Soviet Union itself and the “near abroad,” those communist vassals immediately contiguous with Soviet territory.

Tito, Hoxha, Mao, and Castro all followed Soviet guidelines when its suited their interests, and departed from them when required. But all of them were acting in the name of Communism, and all were intent on establishing their version of its soul-destroying totalitarianism.

And so it is with militant Islam. The Islamists are not directly controlled by bin Laden or King Abdullah or the mullahs of Iran; but they work towards a common purpose, co-operating with each other out of self-interest and deferring the cutting of each other’s throats until the opportune moment arrives.

Look at the Sunni-Shiite division as a parallel between Soviet Communism and Maoism. Give Zarqawi the role of Josip Broz Tito, with his propensity to ignore central direction and follow his own plans. The Communists had the KGB to spread money and disinformation; the Islamofascists have the Saudi “charities” to perform the same functions.

Call it the Islamintern. Like the Comintern, it attracts the marginal, the disaffected, the petty thugs and common criminals, and gives them a clear and simple ideology to guide their actions. It allows them to continue in their customary ways — murdering, raping, stealing and extorting — while furnishing them with a mandate from Allah to do so. The Communists were following the dictates of History, and the Islamists are carrying out the will of God.

To the willing dupes in the West, there is no connection among all these groups, just as there was none among the Viet Cong and the FMLN and revolutionaries of Angola. But somehow all these native freedom fighters just happened to be fomenting violence in the same way at the same time.

And somehow all these terrorists spread all over the globe just happen to be murdering and maiming in the name of Allah. It’s just coincidence.

The Comintern, of course, was aided in its efforts by all the fools and shills in the West.

In the 21st century, the Islamintern has Dan Rather, Cindy Sheehan, Jimmy Carter, and The New York Times.

Every generation has its useful idiots.