Taybeh (also variously spelled “Taiba” and “Taibeh”) is a Christian village east of Ramalla. The fifteen hundred people who live there are Roman Catholic, Greek Orthodox, or Greek Catholic. It is an ancient town: in the Christian tradition, back when the place was called Ephraim, Jesus retreated here after raising Lazarus from the dead and before he made the journey into Jerusalem to be crucified.

Taiba made the news last September. Back then we posted on the episode when Taiba was overrun by a mob of Muslim men bent on destruction in order to restore their “honor.” How rampage and mayhem restore honor has always puzzled me, but then I’m not multi-culted enough to appreciate these nuances. What happened in September was a Romeo and Juliet story with a fundamentalist Muslim toxic twist:

What triggered the event? Oh, the usual: an Islamic rage-reaction meltdown to the idea of their women’s sexuality. These people really do bear some behavioral resemblance to yellow jackets. Unfortunately, one cannot simply take medicine to counteract their poisonous sting.

A thirty-year-old Muslim woman from the nearby village of Deir Jarir was discovered by her family to have been romantically involved with a Christian man from Taiba. Their solution to this treason was to make her drink a dose of lethal poison and then bury her body. When the Palestinian authorities began an investigation of this crime, including the exhumation of the victim’s body, the result was a rampage by the Muslim men of Deir Jarir against the Christian village of Taiba.

Had the Palestinian Authority ignored the situation, the people of Deir Jarir would have left it at that. But they started poking around and so the Muslim town used the Muslim solution: further restoration of honor by the application of mayhem and vandalism. Of course, the PA didn’t show up for the event until it was all over.

As we remarked at the time:

The Palestinian Authorities took their time arriving. Is this a surprise? By the time they got there, cars had been torched, sixteen houses burned, and the whole village terrorized. The PA did manage to prevent the mob from harming the Khoury Beer Factory. Evidently, Taiba beer is famous in the area. Not partaken of by the Muslims, of course, since the Koran forbids it and these are Allah-fearing men.

Their protection of the brewery may be moot now. With the election of Hamas, alcoholic beverages will go the way of the any other kafir custom.

The owner hopes to save his brewery, though he isn’t hopeful about his chances. According to the Times Online, the owner, Nadim Khoury, has been watching the winds of change sweep through Palestine. Like any other businessman, he is attempting to move with those changes:

At the only brewery in the Palestinian territories they believe they can see the future. And under the government of the Islamic movement, Hamas, it is alcohol-free and green.

The Taybeh brewery in the West Bank is alarmed that the administration could impose its strict vision of Islam, banning alcohol and ending the unique decade-old business. 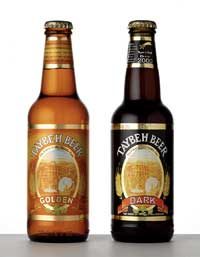 But the bosses had already seen the winds change and four months ago began developing a non-alcoholic beer to be ready for the summer. For good measure they gave the bottle a green label, the colour of Hamas.

“We’re definitely considering this non-alcoholic version of our beer. It’ll have a green label, since the sky’s green now,” said Nadim Khoury, general director of Taybeh, in a wry reference to the ubiquitous Hamas flags. “Everybody’s concerned about what might happen.”

What do you think “might” happen? You already know what I think: the good people of Deir Jarir will return one night, incensed over some magnified slight on the part of Taybeh’s citizens. Only this time there will be no Palestinian Authority to arrive in time to save the brewery.

The Times spouts the party line, though:

But Hamas is not the Taleban. Its leaders are fiercely proud that their daughters are highly educated and emphasise that there are no plans to impose sweeping social change or the religious ideology of Hamas — despite its long-term commitment to Islamic law — through parliament.

The West Bank spokesman for Hamas, Mahmoud Ramahi, who has just been elected, said that the movement’s policy was not to force any social change on an unwilling population.

“We’ll not interfere with Palestinians’ liberty or freedoms,” Dr Ramahi said. “Girls won’t be separated from boys in schools. Women won’t be forced to wear hijab. We won’t close restaurants that serve alcohol.”

Of course they won’t close them. They’ll simply bomb them out of existence, as they did with the UN Beach Club. There aren’t any restaurants left that serve alcohol, and Ramahi knows that. And he knows that we know that.

Such is the nature of taqiyya. Think of it as a variant of diplomat-speak — sans the nuance, of course.

2 thoughts on “When The Sky Over Taybeh Turns Green”