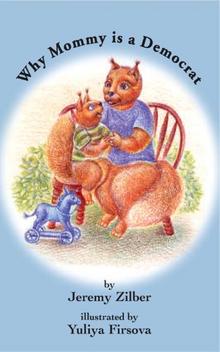 Filed under “You Can’t Make This Drivel Up,” find the all-too-kind “book” “review” at American Digest. Both words have scare quotes because it’s not really a tome, it’s a creepy children’s agitprop tale.

And Mr.Vanderleun does not so much review this…this…thing so much as he attempts to understand it by dissecting it. His description of the author and his ilk is apt: he calls them “moist men,” for moist they are, and moldy. Not to mention unmanly.

How in God’s creation did we end up with so many geldlings? And why, as he points out, are so many of them Democrats? Years ago, Jude Wanniski divided the political parites into the Mommy Party and the Daddy Party. Back then, it fit better than it does now. For one thing, men and women were still speaking to one another and to the children. That’s not so frequent now.

But the Mommy Party, the Dems, have become such a parody of themselves that manly men have no choice but to leave. One should not have to sacrifice the family jewels for politics. Here’s how Mr.Vanderleun describes the author and his kind:

Although they are legion, these moist men sometimes rise above sea level and become a sign, a symbol, an avatar for the rest. Today’s Poster Child for Pap has to be Jeremy Zilber. Zilber’s got all the career achievements you need to be the very model of a modern moist Democrat. B.A. from Oberlin, styles himself a “lifelong Democrat and political activist,” has written a “scholarly” book whose bias shrieks out in its title (“Racialized Coverage of Congress: The News in Black and White”), lives with his partner and her daughter, and a cat. He’s got all the fundamentals down pat. Now comes his crowning achievement, a children’s book called … wait for it…. Why Mommy is a Democrat.

It is hard not to run shrieking from the room. Oh. I forgot: only enraged feminists do that.

By the way, in keeping with this book, you heard that Larry Summers resigned from Harvard? I wonder if he has a gun permit. And a hunting license? Don’t forget the duck stamp, Larry. Or the special one they sell for hunting shrews. And good luck, Larry!

God, will he need it. You can resign but how do you get your balls back once you’ve let someone remove them — and even kissed their hands while they did it?