Amazing thing, the fact of human sensibility. One man’s offensive remark is another fellow’s howlingly funny joke. As Einstein said when the train went by, everything depends on where you’re standing, doesn’t it?

So on Saturday night there were these Syrians demonstrating in Damascus, see? And things kind of got out of hand. Next thing you know, there’s the Danish embassy, lit up like a Christmas tree. On thing led to another and kaboom! The Norwegian embassy was similarly enlightened.

Sunday came and Lebanon, not wanting to be left out, followed suit. CNN reported:

Thousands of protesters packed the streets of Beirut on Sunday, some clashing with security forces and setting the Danish Consulate on fire in anger over cartoons depicting the Prophet Mohammed.

The protests soon escalated into fights between Muslims and Christians, and some protesters threw rocks at a Maronite Catholic church, bringing back memories of the civil war that once gripped the capital.

We’ve got a bad case of dissed Muslims and they want the world to know what they do when they’re dissed.

Turkey, not wanting to be left out, held their own celebrations demonstrations, complete with fire and ranting crowds:

Also Sunday some 300 Muslim Turks marched to the Danish consulate in Istanbul to protest caricatures of the Prophet Muhammad printed in European newspapers, lobbing eggs at the building.

In a separate incident in Istanbul some 2,000 Shi’ite Muslims gathered at a city square for a separate protest, chanted slogans and burned an effigy of Danish Prime Minister Anders Fogh Rasmussen before heeding police calls to disperse.

And no “we will not be dissed” demo would be complete without input from those loveable Palestinians. According toHaaretz everyone had a grand time:

About two dozen protesters stormed the German cultural center Saturday morning, smashing windows, breaking doors and burning the German flag. Down the street, about 30 Palestinians threw stones at the European Commission building, and replaced the EU flag with a Palestinian flag, before police brought them under control.

In the West Bank town of Hebron, about 50 Palestinians marched to the headquarters of the international observer mission there, burned a Danish flag, and demanded a boycott of Danish goods.

“We will redeem our prophet, Mohammed, with our blood,’ they chanted.

Ya gotta love these folks: “loyal and brave” doesn’t even begin to cover it…though perhaps “rigid and homicidal” would be a good start.

You could sympathize with these folks if they rendered the same respect to others that they demand for themselves. “Thou shalt not dis thy neighbor with cartoons” — or some such clever rallying cry. Unfortunately, however, these countries have some of the most bigoted people anywhere. And they don’t just hate the West with Big Satan and Little Satan lined up for target practice, they also have a thousand years of intramural fighting under their belts. Sunni, Shi’ite is just the big division…there are lots more with divisive murderous plans for their fellow Muslims should one group or another come to power. With Mohammed’s Boys, whenever two or three are gathered in his name, at least two are vying for power.

Islamists are expert and devoted haters. Perhaps it’s the desert air? Or the oligarchies they establish to run things? Or the permanent enslavement and degradation of half their population? At any rate, they love to dis the Jews. It’s probably their favorite target, even more so than the US. Where we talk assimilation, they practice obliteration.

And that’s not likely to change. For religious change, one needs a large change of heart, a metanoia. Islam simply isn’t structured to permit change. It’s their way or a one way ticket on the highway to hell. If you can’t change, you’re also unlikely to be a candidate for self-reflection. “Islam” doesn’t translate as “submission” for nothing. 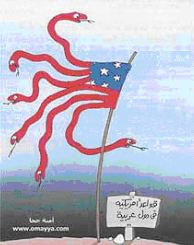 Tom Gross keeps up some Arab cartoons just to demonstrate that — as usual — these people do not ever practice what they preach. No, their form of negotiation appears to be the fire and the sword.In this example of Palestinian satire, they manage to dis both the Americans and the Jews. Snakes are an ancient symbol for Jews, says Mr. Gross.

These Islamist fundamentalists don’t live, they fester. Never was the dictum that one ought to get a life more apropos than it is right now for all the hysterics in the Middle East. Their demonstrations demonstrate one thing clearly: Islam,in its current manifestation, is a degraded culture.

4 thoughts on “The Whole World Is Festering With Unhappy Souls”