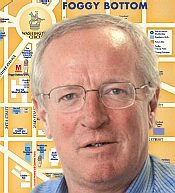 The United States backed Muslims on Friday against European newspapers that printed caricatures of the Prophet Mohammad in a move that could help America’s battered image in the Islamic world.

Strike that. The Department of State is backing the Muslim outrage. The United States is not.

“These cartoons are indeed offensive to the belief of Muslims,” State Department spokesman Kurtis Cooper said in answer to a question.

State Department, you don’t speak for me, or for millions of other Americans who think this orchestrated tantrum is nothing but a ploy to distract us from Iran’s nefarious plans, plans which will bear fruit in March.

This latest announcement reaches a level of stupidity that far surpasses the many other jaw-dropping gaffes that Foggy Bottom — or should I say Fiskie Bottom? — has stumbled into previously.

My disappointment in Dr. Rice’s department is boundless. She was going to make a difference, right? Well, she’s a difference without a distinction. It’s disgusting.

It’s amazing how closely his pronouncements and theirs resemble one another.

IMPORTANT UPDATE: According to Charles Johnson at Little Green Footballs, this story, at least in the form given in this news account, may be a hoax.

11 thoughts on “Is the U.S. State Department Being Run by Robert Fisk?”