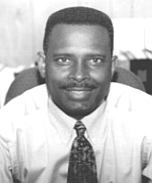 Bill Keezer is home from the hospital. And like any dedicatedcompulsive blogger, he put up a post a few days ago from his hospital bed. It’s a good one, too. He features Elbert Lewis, Jr. — a retired engineer, an ex-Marine who served in Vietnam, an artist, and a science fiction writer. All these experiences and talents give Mr. Ellis the scope to address his issue in the Cincinnati Enquirer. And his issue is the asinine treatment by the blowhards in the black community re the execution of “Tookie” Williams.

In the conflicted and strait-jacketed journalistic world, it is Mr. Lewis’ black heritage which allows him to speak, though no doubt he is roundly criticized for daring to state the facts behind the mess this putative “village” makes:

As you can see, Mr. Lewis and I agree on the Tookie Williams situation: “asinine.” Well, actually I stole the descriptive from him, but I’m giving him credit here. The whole, stupid mess is asinine.

Last month on Baldilocks’ blog, a white student from the College of William and Mary got on the comments and railed against those who took exception to the (at the time) coming execution of Williams. His comment was so ignorant, so lacking in syntax or sense, I was embarrassed for the College. It is, after all, the alma mater of several generations of the Baron’s family, including his Boy, who is currently a junior. To get the full flavor, here’s Jeremy’s comment:

Putting aside the fact that this child’s utterances demonstrate that he obviously doesn’t belong in college, let us use them to make Mr. Lewis’ point about the failed “village” metaphor:

But, as Jeremy proves, when the village metaphor fails in real life, it can still grab the fantasy of marginal people and rabble rousers. What on God’s green earth is there to admire about a killer? The metaphor is simply a way to get the spotlight, to defraud the very people it is supposed to help, and to intimidate those people, black (Bill Cosby) or white (Arnold Schwarzenegger) who refuse to follow the Pied Piper of the mandarins in academia and the MSM.

Recently, when Arnold’s home town in Austria took him to task for the execution of a cold-blooded murderer, he upped the ante and closed the conversation:

Arnold and Mr. Lewis and Bill Cosby are putting the lie to that asinine idea of some mythical village raising our children. Scratch that canard and peel back the painted layer and all you’ve got is collectivism under another name.

I dare Hillary to mention it in her primary speeches. Bring it on, Madam.