Gates of Vienna has been tagged by The Adventuress to discuss the latest details on the Islamicists’ tantrum regarding those Danish cartoons of Mohammed.

The beat goes on. Defeated in court, but still pissy and hypersensitive, the so-called moderate imams from Denmark have been touring the Middle East, spreading lies about Denmark and how Muslims are treated there. 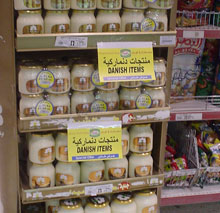 These sore losers, who don’t blink an eye at practicing taqiyya if it gets them what they want, have now instigated a boycott of Danish goods. One company which distributes Danish products, Arla Foods, has information on events in Saudi Arabia. There, the Danish Embassy’s website has posted a letter from the Ambassador. Newspapers in Saudi Arabia have refused to publish it, though they did allow a paid advertisement to be run which displayed the letter.

The amounts of money involved in this imbroglio are not insignificant:

Arla’s turnover in the Middle East is DKK 2.6 billion annually – of which DKK 1.2 billion derives from Saudi Arabia. The company employs a workforce of 1,000 in the region.

And all this brouhaha over some cartoons of Mohammed which the Jyllands-Posten had the nerve to publish.

Every day, Muslims in the Middle East kill, maim, and steal from the small remnant of Christians still alive there. But so what? How does the trivial affair of the deaths of infidel children compare with blasphemous cartoons of Mohammed?

This Islamic tantrum has been going on since September, when the government refused to intervene and punish the Danish newspaper. The pressure on the Danish prime minister by various factions, including his government’s own retired foreign service officers, has continued unabated. And still the government holds firm to its principles of free speech.

The Brussels Journal has kept this issue on the front burner. The MSM in America, of course, has ignored it while stories of what Alito did or didn’t say, do or think since he came of age have taken up all the ink and air time:

Danish Prime Minister Anders Fogh Rasmussen is shocked at the way in which some Muslims are misrepresenting Denmark in the Islamic world. “I am speechless that those people, whom we have given the right to live in Denmark and where they freely have chosen to stay, are now touring Arab countries and inciting antipathy towards Denmark and the Danish people,” Rasmussen told journalists yesterday.

Rasmussen was responding to the recent visits by certain imams, Muslim intellectuals and representatives of Danish Muslim organizations who toured a number of Muslim countries to “explain” the Danish cartoon affair to local political and religious leaders and media. The affair started last September when the Danish newspaper Jyllands-Posten published 12 cartoons of Muhammad.

Are you wondering why we are being treated to this hyperbole by the mad imams from Denmark? The Astute Blogger offers an explanation:

The controversial Jyllands-Posten cartoons were published in September. Er um… that’s FIVE (5) months ago! SO: Why is this coming to a head NOW?

BECAUSE IRAN WILL BE TAKEN UP FOR REVIEW IN THE UNITED NATIONS SECURITY COUNCIL… and DENMARK IS ON THE UNSC AND WILL SOON CHAIR THE UNSC (JUNE)! And they’ve already come out against Iran!

The Adventuress, Dhimmi Watch, and many others are urging people to counter the Muslim tantrums.

Buy Danish foods. My favorite is the Rosenborg brand of cheeses. There is an especially nice one, little cubes of bleu or feta cheese packed in oil with herbs and spices. You can use the cheese in salads — and dig at the bottom of the jar for some of the herbs to season the greens. If you look closely at the image you can see the hexagonal jar way over on the right.

The Astute Blogger is somewhat more ferocious in his approach:

Denmark will not be cowed. Danes are not like the French or the Spanish. Danes are brave and true. In fact, 80% of the Danes oppose any capitulation to the Arab Muslims on this issue – and their parliament just voted to INCREASE their troops presence in Iraq! Even as Libya and other Arab Muslim nations withdraw their ambassadors and threaten a boycott of all Danish goods.

Ummm…Mr. A. Blogger seems to have amassed a rather inclusive list of Arab Muslim traits there. At least I can’t think of any further attributes to add.

Oh, yes, there is one small personality quirk: they lie like rugs. In fact, they lie like prayer rugs. And the buggers consider it a virtue, for heaven’s sake.

And now I have to choose five more victims participants for this distributive information defense. Let’s see…

If you see ’em before I do, let them know, would you? It can be difficult to dig out the email address for some of the sites.

16 thoughts on “The Danish Food Fight”