Do you remember the contretemps in Denmark this past October regarding the cartoon drawings of Mohammed? Well, it certainly has gotten interesting in the weeks since the first story went to press.

The whole thing started when a Danish author complained that he couldn’t find anyone to render a cartoon illustration of Mohammed for his book about the prophet. A Danish newspaper, Jyllands-Posten, concerned about the resounding silence to the writer’s request for an illustrator, decided to ask twelve artists to render their cartoon versions of Mohammed. 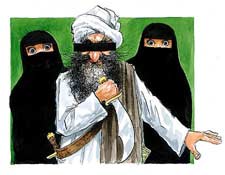 As it turns out, Islamic terrorism has certainly made its fury felt; it looks as though freedom of expression is a thing of the past in Denmark. Or rather, what has passed is the likelihood of living to tell about it if you are ever foolish enough to consider yourself to have freedom of speech where Islam is concerned. The newspaper is now under guard and several of the twelve cartoonists have gone into hiding since the publication of their work. Here’s a sample from one of them: and it has brought down the wrath of Islam’s fundamentalists, not just on the newspaper but upon all of Denmark.

First Danish Muslims took to the streets in protest and it deteriorated from there:

Right. Notice the key phrase there: “In a democracy…” But Islamist fundamentalists don’t live in democracies. They live in parallel to the rest of the world, in utopian fantasies of a mythological glorious past, and based on paranoid beliefs about the sins of the infidels.
Thus, within a matter of days, the Muslim world was making an international incident out of cartoons:

How about those Danes, hmm? None of them caved. Consider what might have happened in, say, Britain, had there been such an incident. Prince Charles would have been on bended knee in front of any imam willing to take his apology.

Now, two months later, the Danish government has issued warnings to its citizens regarding travel to Pakistan:

Good idea. All those Danes look alike anyway. Doesn’t matter which one you kill, really. They’re all infidels anyway.

A tiny Muslim voice of reason was heard in Denmark, however, emanating from the Pakistani Ambassador, Javed Qureshi:

Now that gives you hope, doesn’t it? Except this guy was also one of the eleven Muslim ambassadors in Denmark who signed the haughty letter to the Danish Prime Minister.

Oh, by the way, in case you wondered if this pathological sensitivity is reciprocal, it’s not: 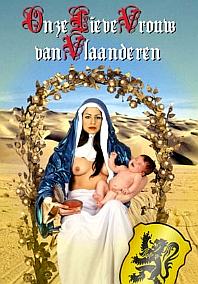 The illustrator of this lovely Madonnna is being paid to present his ideas to school children in Belgium.

Mr. Chikha feels that Belgians need to know that anti-Semitism is not only common among his fellow Belgian-Tunisians, any anti-Semitic feeling is proper and deserved. Why even his Polish step-mother hates them.

I hope there are some Knights of Columbus in Ohio or some such place scraping the rust off their swords and sharpening the edges. Looks like we’re in for a long siege, folks.

Either hide your rosary or get it out of mothballs, depending on your temperament. Those Danes are probably hauling them out and putting them on their rearview mirrors.

10 thoughts on “Warning to Danes: Forget Pakistan for the Holidays”