My posts about Jamaat ul-Fuqra and the Muslim Teachers College have prompted many emails from readers with tips and additional information about Muslims in remote rural locations. One of the tips concerned an “Islamic Center” near Reidsville, NC. As soon as the opportunity arose, I made the road trip to our southern neighbor to see what I could discover. 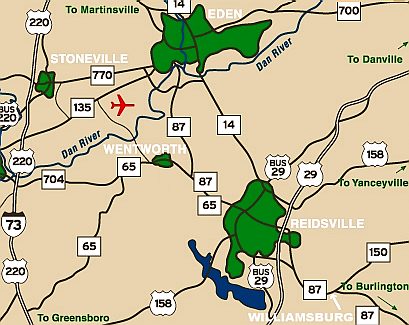 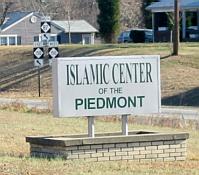 After several misdirections and some wild-goose chasing, I found the place in question. It is called the “Islamic Center of the Piedmont”, and is located in a 1930s-era school building, just outside the small town of Williamsburg, not far from Reidsville.

Unlike the other rural Muslim locations I have visited, the Islamic Center is not hidden away, but is prominently located on a fairly busy secondary road, NC 87. The building is large and well-tended, and even boasts its own water tower in back.

It is divided into two large sections. The southern block seems to be the meeting area. I knocked on the door, but no one was there. A peek through the side window showed an ordinary looking lounge or meeting room, with a photo of a mosque on display. 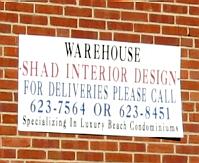 The northern block was probably originally the school gym, and now boasts a sign for “Shad Interior Design.” No one answered the door on this side, either. At the back of the warehouse area on the north block is a large loading bay, presumably used by the interior design company.

After leaving the center, I talked a businessman named Lewis who has an office just up the road. He told me that the Muslims have been there a few years, and that they meet once or twice a month. According to Lewis they are not African-Americans, but look “Middle Eastern”. He said they seem to be professional people, doctors, lawyers, and so on. He didn’t know of any organizational name.

Lewis said that there used to be a used tire and rubber business renting the warehouse space in back from the previous owners. He wasn’t sure if the previous arrangement has continued under the Islamic Center, but we saw no tires or any other indication of a rubber business.

According to Lewis, there is a mosque in downtown Reidsville associated with the Nation of Islam. Its imam is notorious for racist diatribes against whites. Perhaps the “Middle Easterners” of the Islamic Center felt uncomfortable associating with such Muslims, and decided to start their own organization…?

Readers with any further information about the Islamic Center of the Piedmont are invited to comment, or send an email.

5 thoughts on “The Islamic Center of the Piedmont”