After my previous posts about Jamaat ul-Fuqra in Virginia (see parts one and two) I received a number of emails with tips and information about other Islamic locations in rural Virginia.

One of my correspondents was a man in Halifax County. He told me about a place in southern Charlotte County called “Muslim Teachers College,” just across the Staunton River from his home. He said that he had been traveling over that way a few years back and had seen the sign for it.

So, following his directions, I mounted an expedition and went looking for the place. I drove up and down Route 607 along the river a couple of times, and couldn’t see any sign for a Muslim college. So, as is my custom, I stopped in at a local country store near the hamlet of Formosa to ask about a nearby Muslim school.

“Oh, yeah, I know where it is,” said the man behind the counter. He gave me directions to it: back the way I had come.

But before I left he asked me what a “Muslim school” was. I told him it was a private religious school, like a Catholic school.

I drove slowly back down Route 607 towards Randolph, keeping an eye out for the sign, but there didn’t seem to be one. Then, next to a driveway that led up a hill past an abandoned house, I saw what could have been a large metal sign lying face down in the weeds in front of three posts. I turned around and came back. When I put the sign upright against the posts to which it had once been nailed, here’s what I saw: 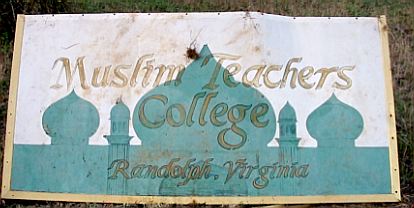 The Muslim Teachers College appears to have fallen on hard times. Here’s the sign in its surrounding context: 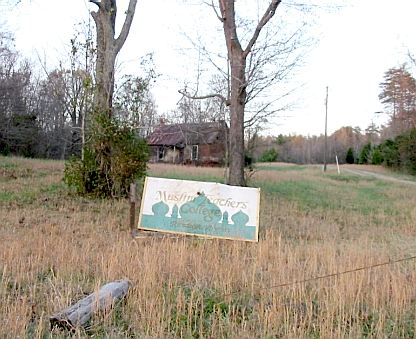 The little abandoned house up the hill beyond the sign looks like it has been unused for at least a decade. There are signs on all the trees and fence posts near the driveway that say “NO TRESSPASSING — Dairy Hill Hunt Club, Saxe, Virginia.” In fact, for half a mile on either side of the road, the Dairy Hill Hunt Club has the same signs posted.

I have no idea whether there is any connection between the College and the Jamaat ul-Fuqra compounds in Red House and Meherrin. But, if you look at the map below, you’ll notice that they’re all fairly close to each other, forming a rough equilateral triangle about 25 miles on a side. 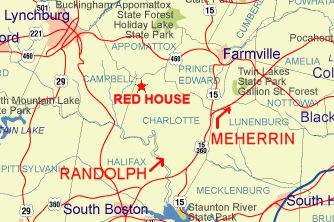 And, as a matter of interest, just across the river is the Dominion Virginia Power plant at Clover, a little less than a mile away as the crow flies. The plant is relatively new — it came online in 1995.

After taking photos of the sign, I tipped it back into its original place and came home to start my research.

A terraserver aerial photo shows that there’s a lot more to the Dairy Hill Hunt Club or the Muslim Teachers College than is visible from the road. Up at the top of the hill the road branches, and there are several buildings scattered around in the midst of the woods. 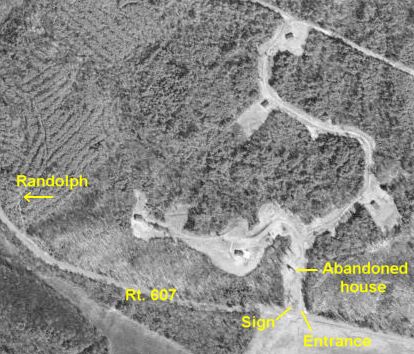 There’s also not much information available online about the Muslim Teachers College in Randolph, Virginia. There are no maps of the campus, no class photos, no lists of courses, and no student information pages. There’s no alumni association, nor any scheduled reunions. But I did find a few references to the place.

There was an announcement on an Arizona State University listserve:

Notice that only boys will be allowed to apply for entrance. And ages 10-13 — so young! They would be studying to be teachers before they even finished middle school. Or were they being selected as practice pupils for aspiring teachers?

Readers should note that the area code for the phone numbers is out of date; Virginia subdivided the 804 code in 2001, and that part of the state is now 434.

Clara Muhammad was the wife of Elijah Muhammad, the founder of the Nation of Islam, and there are a lot of other schools in the United States named after her. This particular one was founded in 1995 (or 1988, according to one source) by Imam Karim Abdel-Shakur, James H. Rasheed, and Qadir Abdus-Sabur. As far as I can tell the school is no longer operating. However, there are still some references to it using the same phone numbers, but with the more recent 434 area code.

The founders turn up at this site, along with two other faculty members:

Karim Abdel-Shakur is listed here as Khairi Abdul-Shakur, and is not mentioned as a co-founder. So Khairi may be a different person entirely, but there is no other information about him to be found on the web.

The Council of Islamic Schools in North America is directly associated with the Islamic Society of North America (ISNA). ISNA was courted by no less than Karen Hughes in her capacity as advisor to President Bush. Despite the objection of many domestic terrorism experts, over the Labor Day weekend this year Ms. Hughes addressed the ISNA at its annual convention. According to ISNA,

But not everyone was happy with Ms. Hughes’ outreach effort, and not everyone considers the organization benign. Frank Gaffney, for one, declared this a first-order strategic error, since ISNA is nothing more than a front for Saudi Arabia’s infiltrration of American Muslim groups.

By her actions, Ms. Hughes gave the administration’s blessing to the further weakening of the national fabric by this Islamofascist group. As Mr. Gaffney noted,

Two years before 9-11, B. Raman of the South Asia Analysis Group wrote:

Tracking down the other founders and faculty members of the Muslim Teachers College produces some interesting tidbits. Sunni-Ali Islam ran a workshop at the Six [sic] Annual Islam in America Conference back in July. His topics? “Islam In American Prisons” and “Educating the Muslim Inmate.”

At least I’m assuming it’s the same Sunni Ali-Islam, since he is in Ohio. He also appears in this news release from the Ohio governor’s office, issued on October 28, 2005:

Just a reminder to our readers: the conversion of African-Americans to Islam in prison is a prime recruiting tool for Jamaat ul-Fuqra and other violent and fanatical Islamic groups.

Finally, consider a connection between the Muslim Teachers College and another Sister Clara Muhammad School, this one in Philadelphia. According to an Oct. 21, 2004 article in the Philadelphia Daily News,

So some of the players in this fraudulent scheme claimed to have a bachelor’s degree from the little college in Randolph, Virginia, the one that only has 10-to-13-year-olds as students. Very strange.

In my first Jamaat ul-Fuqra post, Red House resident Shirley told of her discovery, back off the road in the middle of nowhere, of a “Training Camp for Young Muslim-American Men.” Based on the time frame involved, those little boys in Randolph could have graduated to the training camp just a few miles to the north — but, on the other hand, that could just be a paranoid thought.

Three isolated, reclusive rural African-American Islamic establishments in the hinterlands of Virginia. Two of them associated with Muslims of the Americas, and one with the Nation of Islam. Both connected to Islamic proselytizing in the prisons. Both groups involved, directly or indirectly, with the fraudulent acquisition of public funds. Both involved with the education and training of young people according to the tenets of the Koran.

I’ll leave the reader with a list of unanswered questions.

Readers are invited to suggest new questions for this list, and are also welcome to do the investigative work to answer them.

Note: The URL listed above for the cached Philadelphia Daily News article, which was active at the time of my research, is no longer good. For those interested, the entire article can now be found here.