The Baron inisists: my post from The Neighborhood of God on
Christmases past should be hung up to dry here at Gates of Vienna.

A Merry You-Know-What to everyone. And a Happy, Holy Season to those whose hearts are so inclined.

Yeah, Christmas at an orphanage sounds bad. But when you’re six years old, what do you know? It was Christmas, just like everybody else.

There are parts that stand out for me. One is the hymns we prepared all through Advent so we’d be ready for Christmas morning (years later, in middle school, the Gregorian choir was my introduction to midnight Mass. Besides getting to stay up till midnight to sing, there was the excitement of singing “Adeste Fideles to a packed house which emitted enough alcohol fumes to share a little cheer with us, way up in the choir loft). There were strong delineations between the hymns we sang and the Christmas carols we prepared for the school party. Somehow they didn’t mix back then.

Then there was the party at the Naval Air Station. Christmas for the Orphans, put on by the sailors. We all got a present from Santa Claus — he smelled like moth balls — and loads of food. The first year’s party was my introduction to black olives. I put a few in my mouth thinking they were grapes — I should have been suspicious since these “grapes” were next to the carrot sticks and celery on a plate, but back then grapes were my passion and I’d never seen an olive. The deeply salted taste surprise scarred my little gustatory psyche for years. I was twenty-three and in an Italian restaurant before I ventured near another one.

That first year, I was young enough to sit on Santa’s lap. When he asked what I wanted for Christmas, I told him — duh — I wanted to go home to my Mother. Big silence. Then he said “sure, sure, little girl,” and passed on to the girl behind me. Since I’d been praying to go home ever since I’d heard about “ask and ye shall receive” I tried it like a key on anyone who gave me the opening — no longer expecting an answer but impelled to ask anyway. At the party, though, with the band playing carols and all the food, I never ruminated long.

On the long ride back to the city on the Navy bus we sang Christmas carols and ate most of the little boxes of hard candy they’d handed out on the way out the door. To this day, “O Little Town of Bethlehem” makes me think of that dark trip on the warm bus, watching the stars first, and later the street lights as we neared the city again. It’s a song I associate with sleepy sweet sadness.

We also had our own Christmas party at school. Everyone got up on stage and did their own solo. Mine was usually “Jolly Old Saint Nicholas,” because of my favorite line: “Neddy wants a pair of skates, he thinks dolls are folly.” “Folly” was so foreign, so antiquated: I loved the idea that someone could think of a way to use “folly” in a song. Now that I consider it, however, when “Good Golly, Miss Molly” came to be written, my favorite word would have fit in well. But it never crossed Little Richard’s lips. He was obviously thinking of other things in his song.

As Christmas drew nearer, we made loooong paper chains, red and green. The paste was white and came in large jars with brushes inside the lid. Later, after we’d hung them on the tree, we got to put up angel hair as the final touch. “Angel hair” is long gone as a Christmas decoration. It was made of fiberglass, finely spun, and little pieces of it became attached to the spots of glue and inevitably created myriad splinters which worked their way into the skin on my arms. I called it “Christmas tree itch”; the agony took days to go away.

The nuns took us shopping the Saturday before Christmas. It’s hard to believe they herded sixty little girls down the street to the dime store near the Florida Theater, but perhaps they took us in groups. Of course, back then, weirdoes weren’t stalking the aisles of stores checking for loose kids, so maybe they did take us all in one fell swoop. We each got a dollar to spend and we deliberated long and carefully over our choices. It really was a dime store. Most years I got my mother my heart’s desire: a box of chocolate covered cherries, which left enough to buy a handkerchief for my brother. One year, though, I splurged and got two sherry glasses for mother and nothing for Mark. I still have one of those glasses, etched with grapes.

There was a nickel to spare from my purchase so I used it to buy some candy for my best friend, Sylvia Rivera. I loved her dark, curly hair. In fact, I deeply envied her dark, curly hair but kept this fault to myself as envy was not a sin I was willing to share in Confession. One day her father arrived from Cuba and took Sylvia out of St. Mary’s. I was totally surprised — so was everyone else — and thus ended one of the world’s great friendships and began my intense dislike of surprises. “She went home” was all we were told. I looked up Cuba in a geography book and found out they grew bananas there. That old devil, envy, popped up again. Not only did she have curly hair, she had a daddy and all the bananas she wanted.

Christmas morning was exciting — that was the big deal. After Mass (you couldn’t break your fast before Communion back then) we came into the dining room to find a stocking on each chair. There were no ordinary Christmas stockings, either. These were the nuns’ own discarded black cotton stockings, too worn to darn anymore, but very long and capacious. Much better than a fancy stocking, which couldn’t have held half of the loot in one of those long black things. And instead of the usual burned oatmeal (the older girls really couldn’t cook worth a damn) we had toast and tea and eggs. It was all rather magical, digging up one delight after another out of those big black bulges and sipping tea like a grown up. 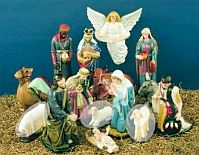 In the afternoon I was permitted to go home overnight with my mother. Our tree was tiny — otherwise it wouldn’t have fit in the living room — but the Nativity scene had a tiny yellow light behind the angel. It lit the manger indirectly, as though it was star shine. I was always impressed. Years later, when I had a family of my own, Mother gave me the Nativity set.

The Baron, not as pious as I, would arrange the sheep in compromising positions. I’ve never known a man who could have so much fun with so little material. Little plaster sheep??

9 thoughts on “Above Thy Deep And Dreamless Sleep…”