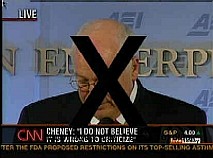 Who can resist this Drudge story in all its naked truth? The MSM has tilted so far left they’ve fallen overboard.

This screen capture provided by Matt Drudge ought to be spread far and wide across the blogosphere. While Miz Mapes blathers on about those “forgeries” from President Bush’s National Guard days, let’s all take a good hard look at CNN’s bizarre silent message.

Eason Jordan’s Icarus-like fall from the sky taught these people nothing. Nothing at all.What’s next, CNN? Bulls’eye targets on the face of the Secretary of State? Or are you saving those for bigger game?

The MSM is not only biased, it’s so far out there as to have lost its already tenuous grasp on reality.

Let’s tiptoe away…this is too creepy for words.

8 thoughts on “The MSM is Creepy”