Here’s my letter to our Congressman, Virgil Goode, who represents the Fifth Congressional District in Virginia.

Like many Americans of his generation, Representative Goode has made the political/philosophical journey from Democrat to Independent to Republican. He is a modest man who serves his constituency — mostly Red-Staters with a few Blue Spots here and there — with integrity and attention.

Virgil’s response follows my email, which I sent late last week. As you can see, one of his other virtues is promptness.

As active bloggers the Baron and I are members of several groups whose interests in governmental advocacy is evolving. One of the issues reverberating through the blogosphere is the astronomical sums needed for aid to Katrina (and soon, Rita) victims.

As believers in a supply-side economy we are against raising taxes to assist these areas. Such a move would simply increase the economic damage already being done by acts of God; we are praying that acts of Congress don’t exacerbate the situation and do further harm to our national productivity…not to mention the foolish acts of man: people who build those monstrous “cottages” within sight of the beach and then want federal money to cover the cost of their loss when seasonal weather comes along lack all integrity. In my humble opinion.

As an aside, I’ve always thought those people don’t need aid, they need an IQ test. Ditto for anyone who wants to live below sea level and depend on the feds to (literally) bail them out.

From where we sit (and admittedly we “sit” on a ridge high enough that water will never be an issue. We actually did that on purpose since looking at Howardsville is a cautionary tale for anybody worried about floods) there doesn’t seem to be any way Congress can begin to meet the needs of these areas without some trimming of the lard-laden spending projects currently up for consideration. Or even those already passed. If that isn’t done *first* then throwing FEMA money around is actually harmful to the rest of us, and while it helps those areas in the short term, in the long run it harms initiative and private projects. There is much we can do as private citizens first, before Uncle Sam steps in. Some wag suggested that Wal-Mart did such a good job in handing out generators, supplies, etc., that we ought to consider WEMA instead of FEMA.

I am requesting that you review what projects are up for consideration and explain your position re cutting pork for the emergency we’ve been handed. My request is simply one of many others in the blogosphere. We are in the process of compiling a Congressional head count to see what can be done to make room for hurricane aid by using funds from existing programs — just like in real life.

By the way, one thing that struck me in reading about the proposed allocation of monies in Virginia is that much of it goes (in small amounts, admittedly) to technological improvements for local law enforcement. Some of it seems to be techie-driven rather than a fundamental “need.” Another disturbing trend is all the monies being thrown at juvenile crime prevention. Are there any studies to show that this actually helps? I ask because the studies I read a few years ago showed that DARE was a boondoggle, to put it mildly. So is Head Start, for that matter. Having worked with both populations, I don’t place much value in government intervention.

Waay too much is being expected of the feds by local government. Things that could be done by private initiative (and perhaps rewarded with tax breaks, a la the Neighborhood Assistance Act program) are instead getting funded in Washington.

So. This email is to request a list, if any, of projects you intend to assist in having trimmed by Congress. Your response would be posted on our website and on the national compilation being done by one of the aggregators (the term being used for very large bloggers that collect and disseminate information).

By the way, though I haven’t followed this issue out to all the states, a number of bloggers are reporting disappointment/anger at the lack of response from their reps. I don’t mean that they didn’t agree with their reps; I’m talking about a failure to reply one way or another. The resulting anger makes me wonder if this portends any sea change for the 2006 elections? It’s too early to tell, of course, but it will be a trend to watch — especially in Massachusetts. 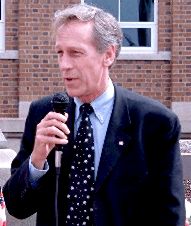 By the way, I looked up your “report card” on the Pork site, and you scored pretty well! Congratulations…though a small boo for the health care mess. Without that vote, you’d have been an A student, Virgil.

Thanks for reading. I look forward to your response.