This is the latest in a series of monthly reports by our British correspondent JP on the progress of worldwide Islamization, as represented by the building of mosques, and activities associated with mosques.

This is the tale of Avondale Islamic Centre. It’s like the Mosque on the Prairie, except it’s in New Zealand, and it’s a real mosque so everyone is trying to kill each other.

See the New Zealand section for details of the holy war launched by a firebrand Salafist imam and his followers on other Muslims, private security guards, and New Zealand Herald reporters covering the story.

Finally, some commentators at recent online discussions about the British Islamic schools Trojan Horse plot provided links to the Channel 4 documentary Undercover Mosque, first aired on 15 January 2007 — a link is repeated here in the end notes.

One of the founding members of the Clinton Islamic Center, Dr. Anis Ansari, elected president for the fourth time in the past twelve years.

Bridgewater residents jeered and disputed traffic expert testimony that suggested the proposed Al Falah Center mosque development would not have a negative impact on local traffic. The next planning board meeting at the Bridgewater-Raritan High School is scheduled for 30 June.

Report on plans by the Islamic Society of Central New York to build a $1 million mosque-community center on land it owns on East Seneca Turnpike in the town of Onondaga. “Our numbers are growing — we need more space,” said society President Mohamed Khater.

A federal appeals court ruled that a Christian police captain from Tulsa was rightfully punished for refusing to enter a mosque for a police appreciation ceremony.

The Islamic Center of Columbia, also known as Masjid al-Muslimiin, held a ‘Share Islam Day’ for those interested in the area’s diverse spirituality.

Senior Judge Paul Summers of Davidson County appointed to hear a case over a county-approved cemetery at the Islamic Center of Murfreesboro after all other judges in Rutherford County recused themselves from the matter.

END_OF_DOCUMENT_TOKEN_TO_BE_REPLACED 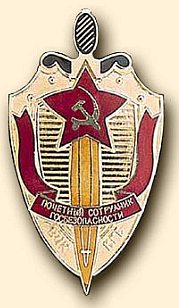 Several years ago I wrote about the Soviet counterintelligence state, whose principal intelligence organ underwent numerous mutations from 1917 to 1991, becoming successively the Cheka, the OGPU, the MGB, the NKVD, and various other acronyms before it settled into its final form as the KGB in the 1950s. The state intelligence apparatus did not dissolve after the Soviet Union collapsed, but was reorganized as the FSB, and still serves as the security service for the Russian Republic.

In addition to enforcing total Bolshevik control within Soviet Union, the KGB was tasked with sowing confusion, conflict, destabilization, and revolution abroad. Ten broad classes of counterintelligence were conducted abroad by Soviet agents and their proxies:

As Ion Pacepa notes in his superb book Disinformation

, #7 dezinformatsiya was considered by the Soviets to be the most effective tool of subversion against the capitalist world. The dissemination of disinformation absorbed more resources and manpower than traditional espionage (that is, the collection and analysis of the enemy’s secrets). The acquisition of the H-bomb was a crucial necessity, but so was causing disgust, doubt, and despair in the hearts of ordinary Westerners.

Interestingly enough, a wave of disinformation recently surfaced here in the comment threads at Gates of Vienna. I didn’t pay much attention to it at first; it took me a while to catch on to what the new commenters were up to. They obeyed our rules and didn’t engage in ad hominem attacks — their comments were just hostile, and I’m used to that.

The new trolls asserted various negative things about Christians, white people, Europeans, etc. They left information contradicting the post or other commenters in ways that made Muslims look good or non-Muslims look bad, but without providing any links.

What made me start paying attention was the issue of the teenage girl in New Zealand who was forced to wear a burka to cover up her injuries after her father beat her up. Several commenters — who may have been sock puppets for a single operative — appeared on the news feed thread and stated that the information in this news story was incorrect, that the family were Maoris and not Muslims. They reported that major media outlets in New Zealand had in fact run corrections. They even named specific media outlets, but supplied no links.

By this time I had realized we were being trolled, and deleted all the new instances of such comments. While I was at it, I took the trouble to look more deeply into the New Zealand story. After extensive searching through media reports, I concluded that no such corrections existed. There weren’t any stories that contradicted the initial reports from The New Zealand Herald.

This confirmed that we were the target of a deliberate, sophisticated disinformation campaign.

END_OF_DOCUMENT_TOKEN_TO_BE_REPLACED

When I heard about the anti-mosque demonstration in Tahiti, I thought, “Egad — there’s no place left unenriched, except possibly Easter Island and Antarctica!”

Coming next: The McMurdo Sound Mega-Mosque.

Many thanks to Bear for translating this French news video, and to Vlad Tepes for the subtitling: