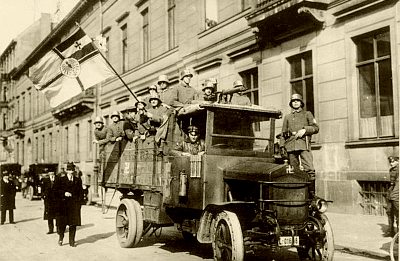 As you all know by now, earlier today German security forces arrested 25 people for allegedly plotting a putsch to overthrow the federal German government.

I have no idea whether such a plot was really in the works, but there’s one thing I’m sure of: if 25 plotters were arrested, then there were at least ten additional conspirators (probably more) who were planted in the group as agents of the Federal Office for the Protection of the Constitution (Bundesamt für Verfassungsschutz, BfV), Germany’s domestic intelligence agency. Like the FBI, the BfV is notorious for having a large presence in all right-wing dissident groups.

Another interesting point about the arrest of the putsch plotters: in a Skype discussion this morning, one of the German translators floated the possibility that the arrest was timed to distract attention from the murder of a schoolgirl in Illerkirchberg by an Eritrean culture-enricher.

The following report concerns apparent leaks to the media about the arrests before they occurred. Many thanks to Hellequin GB for translating this article from Pleiteticker.de. The translator’s comments are in square brackets:

The day before the tricky putsch raid: ARD journalist made allusions on Twitter

One day before the much-noticed GSG9 raid against a terrorist cell in the Reichsbürger scene, which according to investigators was planning a violent coup, an ARD journalist made allusions to the top-secret planned arrests on Twitter.

More than 3,000 security forces were deployed across Germany, including GSG9 and SEK units. During the action, 137 apartments and commercial buildings were searched involving 52 suspects, and numerous arrests were made. They are accused of planning a coup d’état. [Right, how is such a small number of people going to do that? Especially without the military behind them?]

The plan was to storm the Bundestag and overthrow the government. The Reichsbürger [imperial citizens] then wanted to install Prince Heinrich XIII Reuß as “regent”. The terror cell surrounding the prince is being investigated on suspicion of forming a terrorist organization and planning a serious act of violence that is dangerous to the state. The Attorney General in Karlsruhe is investigating.

What is remarkable, however, is how early many media reported extensively in background reports this morning. This indicates that the information about the raid was leaked to quite a few media in advance. [I smell a real nasty sewer rat here.]

Even more explosive: The day before, the ARD journalist and Kontraste head Georg Heil tweeted: “I’m afraid tomorrow there will be many ‘exclusive’ reports.” With this he alluded deliberately and publicly to the raid, which was still highly secret at the time for the next day.

I have the sneaking suspicion that there will be a lot of “exclusive” messages tomorrow.

Such a public allusion is actually an absolute no-go. Normally, such information is given to journalists on the unequivocal stipulation that none of it will be leaked before the action.

In addition, with his “many exclusive reports” statement, he also hinted that a large number of media had received this information in advance. But that makes it all the more likely that the information will be made public beforehand or ends up in the wrong hands. All of this jeopardizes the security of such a highly complex raid.

Especially with such a large-scale raid, where various anti-terrorist units storm apartments and houses all over Germany, one would have to think that there is a higher level of secrecy. Instead, the information about the Reichsbürger raid from the Ministry of the Interior or Justice was leaked to so many editorial offices in advance that one has to wonder whether PR was more important there than carrying out the large-scale raid safely.

Dealing with the secret information also raises questions. How seriously do you take the threat to democracy posed by the Reichsbürger cell if you treat the confidential news about the next day’s raid as an open secret — and even joke about it publicly on Twitter beforehand?

ÖRR colleague confirms that they had been informed in advance. That doesn’t change the great performance of the emergency services. On the contrary, the achievement is even more remarkable because the political leadership apparently deliberately exposed it to an enormously broad risk of leaks. https://t.co/G7XdT1Z17i

This whole thing stinks to high heaven, and comes right on time for whatever is planned next for the German people. And I’m pretty sure that most will believe that there was a threat to the country, posed by a handful of people. When the next Islamic terror attack happens, these selfsame “security agencies” will have been in the dark. Just like the FBI doesn’t seem to solve any crimes they themselves haven’t set up or committed, and I’m pretty sure it’s the same scenario here.

This reminds strongly of stories I heard from my grandparents who lived through the Nazi era. Nothing, but really nothing, ever changes for the good of the people.

6 thoughts on “When Putsch Comes to Shove”