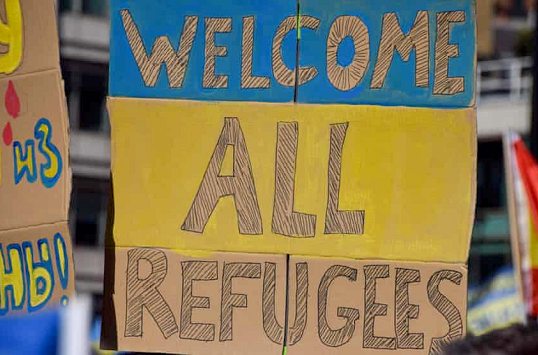 Many thanks to Hellequin GB for translating this article from the Berliner Zeitung. The translator’s comments are in square brackets:

Poland: Ukrainian refugees will soon have to pay for food and shelter

Poland spends a lot of money on accommodating and feeding Ukrainians. Therefore, the war refugees should pay part of the costs themselves.

Poland has taken in more Ukrainian war refugees than any other European country. This means that Germany’s neighbors have spent comparatively more money on accommodation and meals than other EU countries. As the New York Times reports, the Polish government is therefore planning that from the beginning of next year, refugees from Ukraine will themselves have to pay for some of the accommodation and food provided by the state. [I’ll make an educated guess that the German Greens will invite them all to cross the border, with all expenses paid.]

The Council of Ministers has already passed a corresponding draft law, which should be passed by Parliament without any problems. The newspaper refers to a statement by the Polish Prime Minister.

Poland was said to be bearing the brunt of the largest exodus in Europe since World War II. While most Ukrainian war refugees have since traveled to other countries or returned home, as of this month nearly 1.5 million Ukrainian citizens were still registered as refugees in Poland, according to The New York Times. Poland will spend more on housing, healthcare and other services for Ukrainians than any other European country by the end of the year, according to a recent study by the Polish Economic Institute. As the country, like much of Europe, struggles with inflation and high gas prices, there are signs that some of Poland’s electorate may be beginning to feel fatigued.

In June, the government announced significant cuts in support towards Ukrainians, saying it would scrap daily allowances for refugees and end payments to Polish families who take them in. However, most of these cuts, which were due to start months ago, have not come into effect because of opposition from local governments. The new measures announced by the central government, which are due to come into force on March 1, will apply to Ukrainian refugees staying in the country for more than four months.

Doesn’t Poland get any EU money to care for and accommodate Ukrainian refugees?

This decision could trigger another wave of travel to other European countries, with Germany likely to be the focus because of the cash allowances and free accommodation.

The Germans should actually wish that they themselves might have politicians like Poland has, and at the same time be angry with the Poles. It is more than understandable that Poland now wants the refugees from Ukraine to share in the costs of their accommodation and food. The EU is constantly demanding solidarity, but Poland is left in the lurch when it comes to the costs. And Ukrainian refugees are demanding and not exactly easy to care for. Politicians persuaded these people that they were something special. The cost-sharing that has now been decided by Poland will induce a large proportion of these refugees to switch sides and go to Germany.

What some EU countries dare to do would be unthinkable in Germany. They’d rather steer their Ship of Fools into the next iceberg and let the passengers perish while the “crew” abandons ship.