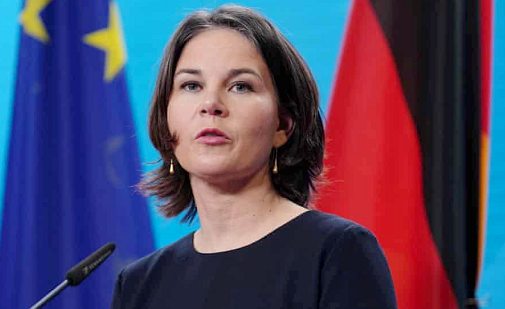 First it was Claudia Roth in Berlin, and now it’s Annalena Baerbock in Münster: the push by the Greens to extirpate Christianity from Germany is proceeding unabated.

Baerbock has the cross removed!

G7 summit in Münster: The foreign ministers of the most important countries in the world are there — but the cross of God must remain outside!

Federal Foreign Minister Annalena Baerbock (41, Greens) had the centuries-old Council Cross removed from the Hall of Peace in the historic town hall in Münster for the duration of the G7 summit.

The G7 foreign ministers’ meeting takes place in Münster’s historic Peace Hall: in 1648 it was the scene of the invocation of the Spanish-Dutch Peace — part of the Peace of Westphalia.

But for the duration of the meeting, Baerbock blocks out an important part of the story: the 482-year-old council cross is missing!

It is actually part of the permanent inventory of the hall, but at Baerbock’s request it has now been taken down, as the Westfälische Nachrichten first reported. The city of Münster confirmed a corresponding request to the newspaper.

Such a request has never been addressed to the city, administration circles said to the Westfälische Nachrichten.

“The cross was removed for reasons of protocol,” the Foreign Office said, when asked by Bild.

The cross dates back to 1540. To this day, all new council members in Münster are sworn in before it — unless they explicitly refrain from adding “So help me, God”.

Not the first excitement about a missing cross: Only two days ago, the green culture officer Claudia Roth (67) caused outrage when she wanted to make Bible quotes disappear from the dome of the Berlin City Palace and have them overwritten with other texts.

What else can one expect from a communist Baphomet admirer with a Satan chip in her “brain”? I wonder if she also has fits when the host is walked past her or holy water sprinkled on her, or shivers like Merkel when the German National Anthem is played? 482 years ago they’d have invited her for a very personal BBQ for this. A pity we’re not allowed to do that any longer; some really DO deserve it.

11 thoughts on “Christianity Must Be Erased From Münster”