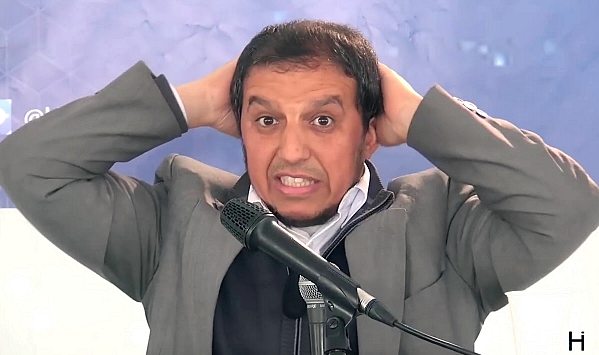 Back in August I posted about a “French” imam named Hassan Iquioussen who went on the lam to avoid being deported. It seems Mr. Iquioussen had run afoul of French law by giving voice to Jew-hatred, calling for the subjugation of women, promoting sharia, and other orthodox Islamic theological positions.

The expulsion order mentions that Imam Iquioussen espouses doctrines that represent “a vision of Islam contrary to the values of the Republic.” Unfortunately for the Republic, all Islamic doctrines, if faithfully observed, are contrary to its values. Evidently the courts are unaware of this fact.

Now Mr. Iquioussen has been recaptured in Belgium. Many thanks to Gary Fouse for translating this article from Le Figaro:

The Moroccan preacher, on the run, has been charged in France for remarks deemed contrary to the values of the Republic.

Imam Hassan Iquioussen, the subject of a European arrest warrant submitted by the French judiciary, has been arrested in Belgium, the Belgian Justice Minister informed Agence France-Presse. “I can confirm to you that he was arrested today by the police,” declared Minister Vincent Van Quickenborne.

The preacher, charged in France for remarks contrary to the values of the Republic, is under an expulsion order signed July 28 by Interior Minister Gerald Darmanin. The preacher, born in France 58 years ago, but of Moroccan nationality, has been classified S [for state security] by the DGSI [General Directorate for Internal Security] for the past eighteen months, according to Darmanin.

Charged for remarks deemed contrary to the values of the Republic, he could not be located by the police at his residence in Lourches, near Valenciennes after the issuance of the expulsion order by the Council of State. He was then the subject of a European arrest warrant issued by an investigating judge in Valenciennes (North), for “evading the execution of a separation ruling.” The next day, the Nord [North] Prefect explained during a press conference that the imam was then considered “delinquent” because he was in flight.

The expulsion order reproaches him for “a proselytizing speech interspersed with remarks inciting hatred and discrimination and holding a vision of Islam contrary to the values of the Republic.” His YouTube channel is followed by 178,000 subscribers.

His lawyer, Attorney Lucie Simon, is particularly contesting the validity of the arrest warrant targeting him, maintaining that it is based “on an infraction,” which is, according to her, “not constituted”. “Why look for him? Why do they want to bring him back?” she wondered at the beginning of September.

According to the French Interior Minister, it is now up to the Belgian judiciary to turn Iquioussen over to France in execution of the arrest order. The process of returning the imam to France could take several weeks if Iquioussen contests it.

Between judicial wrangling and media battles, the debates surrounding the imam have fed French news since early August, beginning with the announcement of his expulsion to Morocco, then its suspension by the Paris Administrative Tribunal, which judged that it would “interfere disproportionately with his private and family life.”

He had been hit with an initial polemic in 2004, accused of remarks deemed anti-Semitic in a speech about Palestine. Iquioussen had then acknowledged “inappropriate remarks” and apologized. His name has since regularly reappeared in the press and in public debate.

Born in France, he decided when he came of age not to opt for French nationality. He claims to have renounced French citizenship at age 17 under the influence of his father, and later attempted in vain to recover it. His five children and fifteen grandchildren are established in northern France: One son is an imam in Raismes, and another is a former elected PS [Socialist Party] official at Lourches.