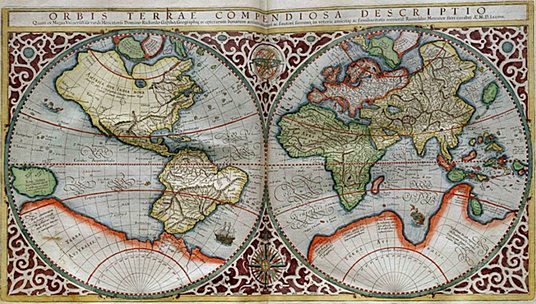 From deepest antiquity until the early 19th century, it was widely believed that there was an enormous continent occupying most of the Southern Hemisphere. Known as Terra Australis, or Terra Australis Incognita (“Unknown Southern Land”), it was thought to be centered on the South Pole, and to extend far north into the temperate regions of the South Pacific and the southern Indian Ocean. The necessity of its existence was logically deduced from the fact that large landmasses were known to exist in the Northern Hemisphere, but not in the Southern. It was posited that there had to be a southern mass to balance out the globe, so a huge continent must exist in the far south.

At various times Tierra Del Fuego, the northern coast of Australia (then called New Holland), New Guinea, New Zealand, the Solomon Islands, and miscellaneous large islands in Polynesia were identified as portions of the coastline of Terra Australis.

Later, as exploration of the far south continued and maps became more completely filled in, the possible dimensions of Terra Australis shrank, and Australia, New Guinea, New Zealand, and eventually even Tasmania had to be identified as free-standing islands (or, in the case of Australia, a continent). Eventually the idea of Terra Australis had to be completely abandoned, and it joined spontaneous generation, the four humors, phlogiston, and the celestial spheres in the dusty attic of discredited scientific exotica.

For centuries the imagined continent had been referred to as Australia. When it became clear that it didn’t exist, New Holland (by then a British territory) was renamed Australia so that it could be identified without reference to either the English or the Dutch. Then, when the real Terra Australis was finally discovered, it had to be given the name Antarctica, since “Australia” was already taken. It turned out to be a cold, bleak, and unromantic place. The customs and practices of the indigenous penguins are nowhere near as interesting as those of the elaborate autochthons imagined by the devotees of Terra Australis.

The people who believed in the great southern continent weren’t wild-eyed zealots espousing a religious cult. They were explorers, scientists, geographers, cartographers, and their aristocratic patrons. The fact that they could hold such firm but erroneous beliefs shows how sober, rational, intelligent, educated men, proceeding carefully and methodically, can get a matter of such great significance completely and utterly wrong.

The elaborate maps and descriptions of Terra Australis arose out of a combination of small scholarly errors and a paucity of well-documented information on the southern reaches. With so little detailed first-hand observations available, a few slight inadvertent errors — mistaking “north” for “south”, the conflation of similar names, etc. — allowed the construction of the imagined continent, assisted by the powerful engine of wishful thinking. Even the habits, customs, and apparel of the natives were described in vivid accounts of the fabulous South.

The idea that there ought to be a landmass in the Southern Hemisphere to balance those in the North makes complete sense. Knowing what we know now, I could have told them: “Yes, there is an actual imbalance in the Earth’s landmasses because of the catastrophic collision that created the Moon and left a big hole on one side of the planet. The southern regions, especially in the Pacific area, comprise the remains of that hole, which is still being filled in by the extremely slow drifting of the Earth’s continents.”

But they had no way of knowing that back then. Their conjecture completely fit the facts, as they understood them.

There may be some lessons in there for us modern-day folk who think we understand everything about everything. Each epoch has embraced its share of “facts” that everyone knew to be true. They were well-understood, beyond discussion, and established by the consensus of the scholars. Yet they were eventually discredited, and now appear as historical footnotes or in anthologies of quaint archaic fancies.

Does anyone believe that our own time is exempt from such misguided fancies?

If not, what are our most significant delusions?

I have my own ideas, but rather than make any suggestions, I’ll invite my readers to duke it out in the comments.

Earlier today, while reading about Van Diemen’s Land (Tasmania), I happened upon the Wikipedia article about Terra Australis. Since it doesn’t have much contemporary political resonance (with the exception of the fact that its chronicles overlap sections of the Narrative about evil European colonialists exploiting brown people), the wiki is a good source of information and makes for absorbing reading.