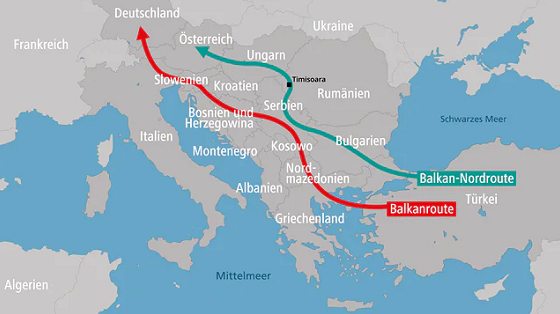 The cultural enrichment of Western Europe continues apace, regardless of the Corona “emergency”, the Ukraine war, the energy crisis, and massive inflation. The newcomers just keep arriving. They’ve heard that Germany is the land where all the goodies are free and all the girls are willing, so they continue to pay the people traffickers (with Soros’ money, but that’s a separate topic) to carry them to the Land of Plenty.

Many thanks to Hellequin GB for translating this article from Bild. The translator’s comments are in square brackets:

New Wave Via the Balkan Route

Are we facing a new refugee crisis? More and more often Syrians and Afghans are caught illegally entering Germany! Around a hundred refugees arrive at Dresden’s main railway station every day — and the federal police expect the numbers to increase! At the moment, however, it is still unclear “why migration has suddenly increased so much,” said Interior Minister Nancy Faeser. [Is she really THAT STUPID, or just callous?]

One thing is certain: for weeks now, mainly young men have been fleeing via the Balkan route, wanting to go to Germany. To do this, they get on the Eurocity train in Prague or Budapest to Dresden (from 28 euros
— often without being checked in the neighboring countries.

As Bild learned from security circles, the respective border police are often deliberately looking the other way so that they do not have to register the refugees and keep them with them. “Whoever registers loses” should be the motto.

It was only in Bad Schandau (Saxony), just across the German border, that the federal police got on the trains and made spot checks. Many refugees have no ID with them, and are registered with fingerprints at Dresden Central Station.

In addition, it is checked whether they have already submitted an EU asylum application or whether they have committed criminal offences. They are then distributed to initial reception centers throughout Saxony. [And given German passports, perhaps, so that the migrant crime rate doesn’t go through the roof?]

How long the camp beds last there — unclear! That is why it is now to be checked, among other things, whether the exhibition halls in Dresden can also be used. In Bavaria, too, there is concern about the already overcrowded accommodations. Compared to 2021, the number of refugees has increased fivefold.

“It’s going to be really tight,” said a spokeswoman for the Munich Ministry of the Interior.

Are the “hundred” those who were caught illegally entering the country? Somehow it looks organized. in Austria, hundreds flow across the Hungarian-Burgenland border every day, and the number of unauthorized entries across the Czech-German border is at a record high.

And the Syrians and Afghans didn’t have the opportunity to seek asylum in the first safe country? Certainly, but in Germany security (social benefits) and protection (hardly any deportations) are much more strongly guaranteed.

Politicians, and especially Interior Minister Faeser, are once again indulging in their favorite pastime of acting and interpreting ignorance. The little bit of intelligence they have is not enough to determine the causes of the increase in the number of so-called refugees. Anyone who constantly trumpets to the world that everyone is welcome and that anyone who has crossed the German border and can vomit out the word “asylum” will receive it and be integrated into the social system. Word has gotten around around the Third World that people are generally accepted in Germany and Austria and receive significant social benefits without having to do anything in return — except cultural enrichment.

The migration pact that Germany signed is being consistently implemented by the UN, the EU and other European countries. These people know that this will lead to the collapse of ALL the social systems, yet they go ahead with their plan regardless, because it is wanted by their puppet-masters. The individual European states are to be destabilized. In particular their own identities need to be destroyed, the degrading of their own culture as racist encouraged, along with each and every social structure, etc. etc. etc. After all, without identity, without cultural similarities, a broad mass can be better controlled, because these newcomers have no roots in the country of asylum, which would also not be considered by them to be their new home and in an emergency, support or defence if necessary, they will feel no need to lift a finger. Not that these people were or are prepared to fight for their own countries in the first place either. This is exactly what is encouraged with unbridled migration, because this is what is wanted, because it is part of the plan of this ALL OUT WAR against humanity.

14 thoughts on “Something Wicked This Way Comes”